The 'Real Housewives of Beverly Hills' star claps back at the Internet troll who calls her out for showing support for her 19-year-old daughter on her racy Instagram post.

AceShowbiz - Lisa Rinna will not let anyone say negative things about her daughter. Having learned that an online troll criticized Amelia Hamlin's sexy lingerie pictures, the star of "The Real Housewives of Beverly Hills" was quick to jump on her 19-year-old kid's defense.

On Tuesday, February 9, the 57-year-old's teen daughter first shared on Instagram several photos of her rocking a white, lacy lingerie. In the accompaniment of the post, she wrote, "easy to practice self love in my @bouxavenue designed in london..... #myboux #bouxavenue #lovemeforme #ad."

Amelia's sexy snaps have since received positive comments. One in particular came from her mother who gave away three white heart emojis. However, the actress' comment was met with criticism from one user who argued, "@lisarinna wtf is wrong with u? U like what u see???? Discusting [sic]." In response, she was quick to fire back, "What is wrong with you? This is my child." 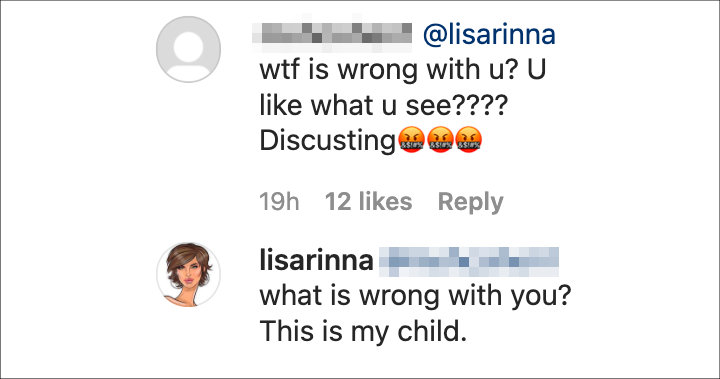 This was not the first time Lisa had to defend Amelia. Back in September 2020, the Bravo star explained how her teenage daughter could afford to rent a $5,700-a-month apartment after people questioned her ability to come up with such amount.

Making use of an "RHOBH" reunion to weigh in on the issue, the TV personality argued, "It's all her money... I'm not even helping her a thousand dollars." She further elaborated, "That's her modeling money... Amelia Gray makes more money than all of us."

The wife of Harry Hamlin was no stranger in reacting to criticism on social media. In May 2020, she also offered a perfect clap-back to a hater accusing her of "pimping" her first daughter, Delilah Hamlin, after she put out a video of her dancing with the 22-year-old girl. 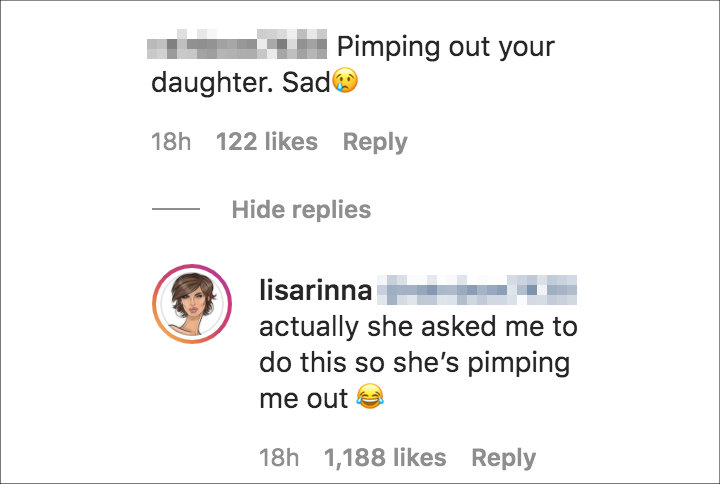 Lisa Rinna offered a perfect clap-back to a troll accusing her of 'pimping' her daughter Delilah Hamlin.

Lisa captioned the post, "Dancing with Delilah! @cultgaia sent us these cute dresses #twinning." After a troll commented, "Pimping out your daughter. Sad," about the post, she hilariously replied, "Actually she asked me to do this so she's pimping me out."