Making public his allegations regarding the jokes in a now-viral skit on Twitter, the comedian asks the hit NBC comedy show to 'Venmo me the sum of 1 million dollars.'

AceShowbiz - "Saturday Night Live" introduced a new sketch about how sexy Zillow real estate listings were in its Saturday, February 5 episode. The skit quickly hit a nerve on social media, but the NBC show was accused of stealing the joke from a comedian.

Comedian Ted Alexandro took to his Twitter account on Sunday to claim that the joke was from his material during his live performance at the Comedy Cellar in New York City. "Dear @SNL, since you stole my Zillow joke last night please Venmo me the sum of 1 million dollars," so Ted wrote alongside a clip of him delivering the joke in his standup performance.

"My full special Cut/Up is on youtube if you need more ideas," he added. "You have until kickoff. Venmo: @Ted-Alexandro," he continued in a follow-up tweet. 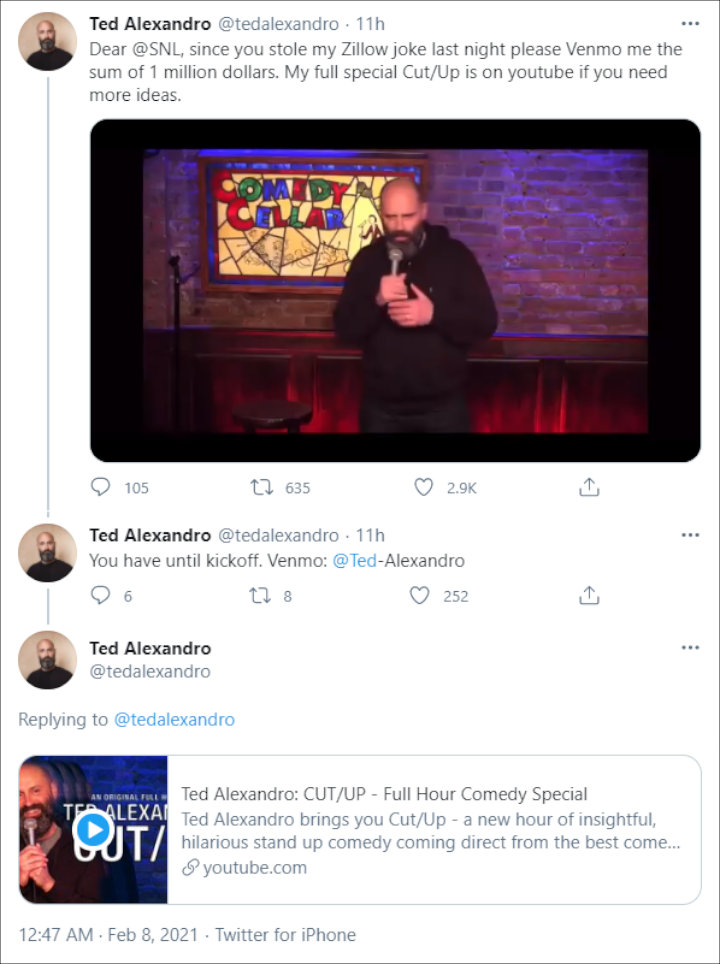 Not surprised by the allegations, one user responded, "When I was younger I was always so impressed that they wrote a whole comedy sketch show in a week every week and then I grew up to be a comedian and realized it's easy when you piece together stolen tweets, jokes, podcast banter and already completed sketches. your joke is great!"

Another user added, "While watching it last night, I literally said to myself, 'This is funny. There's no way that someone didn't already make this joke. I bet tomorrow someone shows receipts.' Not joking. Literally said that to myself."

Someone, however, tried to make Ted's claims invalid by writing to him, "I usually support any comic who's material is stolen, but I'm sorry Ted, I can only support your audience on this one. @SNL didn't steal from you, they stole from the people who saw your Zillow bit. You didn't write the material, you only caused audiences to think of it."

Echoing the sentiment, someone else argued, "Comedians are funny. And they have this power where if they think of something nobody else on the planet can ever have the same idea. It's science." To that, Ted replied, "I work at @ComedyCellarUSA where many SNL writers regularly perform. Stick to privacy apps."

Meanwhile, "SNL" has yet to respond to Ted's accusations.