AceShowbiz - Seth Rogen and Ted Cruz's heated Twitter spat has gotten more rowdy with other parties involved. The actor and the senator have been trading insults on the social media platform for days, prompting other renowned Hollywood public figures to weigh in on it.

The whole thing started on Inauguration Day with Cruz's tweet, in which he criticized President Joe Biden for reentering the Paris Climate Agreement. Not agreeing with the senator, Rogen threw an expletive at the Republican politician, "F**k off you fascist."

Cruz sarcastically responded, "Charming, civil, educated response. @Sethrogen If you're a rich, angry Hollywood celebrity, today's Dems are the party for you. If you're blue collar, if you're a union member, if you work in energy or manufacturing... not so much."

In response to that, Rogen tweeted back, "If you're a white supremacist fascist who doesn't find it offensive when someone calls your wife ugly, Ted Cruz is the exact motherf**ker for you," adding, "also I'm in four unions."

Not showing signs of stopping, the feud was reignited the next day when Cruz took aim at Disney's 1940 animated musical "Fantasia". He wrote in response to MGM Studios' question about the first film that one saw in theaters, "Fantasia. It was playing at a film revival. It scared me; I cried - I was 4. My Mom had to take me out. Good times."

"Everyone who made that film would hate you," Rogen replied. "They're all dead. So I think we're good. And Walt Disney was a Republican," Cruz adamantly responded. "Even though you behave online like a Marxist with Tourette's (screaming 'F U! F U!' is really, really clever), your movies are typically pretty funny. I'm sure you hate that I enjoy them."

Informing the senator that he actually does have a mild case of Tourette's, Rogen told Cruz, "As someone who has Tourette's in their family (and also has a very mild case himself), I once again take great pleasure in telling you to go f**k yourself. (Also VERY few cases of Tourette's manifest in uncontrollable swearing. Most cases, like mine, manifest in twitching.)"

The "Neighbors" star went on blasting Cruz, "All jokes aside, @tedcruz is a fascist piece of s**t," to which the senator replied, "All jokes aside, @Sethrogen is a moron. It's your party that believes in govt power: to shut your business, to oppress your faith & to censor your speech. Anyone who disagrees, they try to cancel. BTW, a lot of folks in Hollywood are conservative - & muzzled by the fascist Left."

Rogen then fired back, "You literally inspired a deadly insurrection you stupid f**k," accusing Cruz of trying "to overthrow our government." He added, "He inspired a deadly mob to storm the Capitol. And I think that deserves ridicule. So f**k him." He continued in another tweet, "Your lies got people killed. You have blood on your hands."

Rogen's celeb pals have since come to his defense, with Joseph Gordon-Levitt trying to explain Rogen's use of the word fascist to label the senator. "Mr. Senator, as @sethrogen's non-threatening buddy, perhaps I can translate 'fascist' into more charming and civil terms," he wrote on Twitter. "Your support of the former President's attempts to baselessly overturn a democratic election is reminiscent of supporters of Hitler, Mussolini, and others." 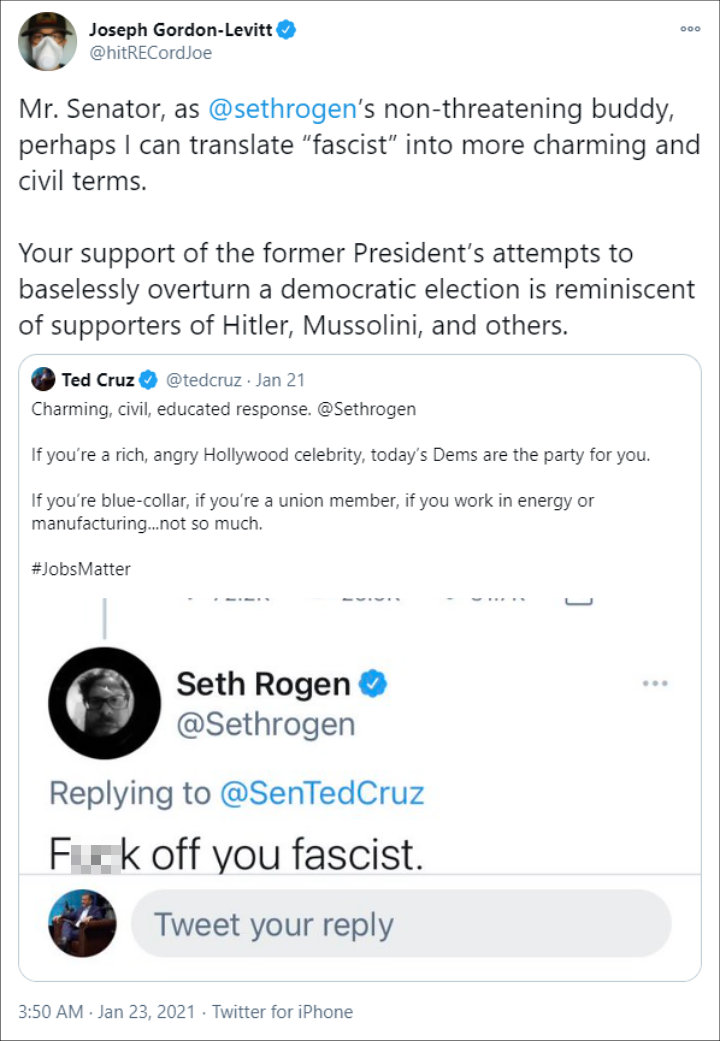 Billy Eichner's had a more fiery response to Cruz's tweets, writing, "Ted Cruz doing clumsy Trump cosplay is so embarrassing. Sweetie, you don't have *it*. You are simply NOT a star! Sorry!"

Cruz has not responded to the tweets from Rogen's famous buddies.

Keyshia Cole Says O.T. Genesis Apologized to Her Twice Prior to 'Verzuz' Duet