The daughter and advisor to President Donald Trump retracts her earlier statement after being confronted about her choice of words to address the pro-Trump supporters.

AceShowbiz - Like father, like daughter. Donald Trump isn't the only one of his family who landed in hot water over his tweet. His beloved daughter Ivanka Trump has also come under fire after she called pro-Trump supporters "American Patriots" in her tweet addressing the Capitol riot.

On Tuesday, January 5, the Advisor to the President relayed her father's message which read, "Please support out Capitol Police and Law Enforcement. They are truly on the side of our Country. Stay peaceful!" through her own account. Adding her own message to the protesters, she wrote, "American Patriots - any security breach or disrespect to our law enforcement is unacceptable. The violence must stop immediately. Please be peaceful."

Ivanka was soon confronted about her choice of words to address the protesters. White House correspondent for CNN Kate Bennett tweeted to her, "Clarifying, @IvankaTrump, you're saying these people are 'patriots' ??" Ivanka soon corrected herself as she replied, "No. Peaceful protest is patriotic. Violence is unacceptable and must be condemned in the strongest terms," while her original tweet has been deleted. 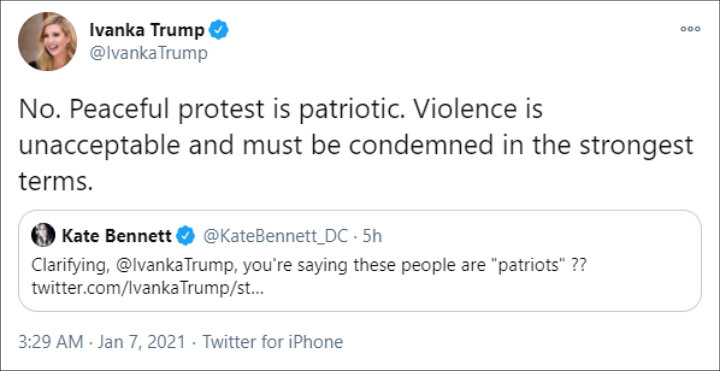 But the damage has already been done and the backlash keeps coming at Ivanka. Someone shared the evidence by posting a screenshot of her earlier tweet and pointed out, "This you." TV writer Bryan Fuller told Ivanka, "YOU ARE DIRECTLY RESPONSIBLE," for the violent protest, while screenwriter Gary Graham shared a photo of the protesters and simply wrote, "Your people, Ivanka."

A user shared a screenshot of Ivanka's earlier tweet.

Meanwhile, Donald Trump's controversial tweets about the Capitol riot have prompted Twitter to suspend his account. Responding to the protest outside of the White House, he tweeted, "Because you'll never take back our country with weakness. You have to show strength, and you have to be strong. We have come to demand that Congress do the right thing and only count the electors who have been lawfully slated. Lawfully slated. I know that everyone here will soon be marching over to the Capitol building. To peacefully, patriotically make your voices heard."

When things went chaotic, Trump urged the protesters to go home while calling them "very special." He tweeted, "I know you're pained, I know you're hurt. We had an election that was stolen from us. It was a landslide election, and everyone knows it. Even the other side. But you have to go home now. We have to have peace. We have to have law and order and respect our great people in law and order."

Ivanka Trump Receives First Dose of COVID-19 Vaccine: 'I Got the Shot'