The 'Milk' actor has sent the Internet buzzing over his disheveled look following his appearance on the morning show to promote his nonprofit CORE that helps provide free COVID-19 tests across the country.

AceShowbiz - Sean Penn has a fun take on the bedhead hair he presented in a viral "Morning Joe" interview. Having sent the Internet into a frenzy over his disheveled look during a recent appearance on the morning show, the "Milk" actor took to social media to share his own reaction to the buzz.

On Tuesday, December 22, the 60-year-old made a crack at his hairstyle on Twitter. "If you think my hair goes wild on 'Morning Joe' when hacked by Russians (allegedly), you should see how much wilder it goes when peeps donate to @COREResponse. You really should:). http://coreresponse.org/donate @MSNBC @Morning_Joe," he quipped. 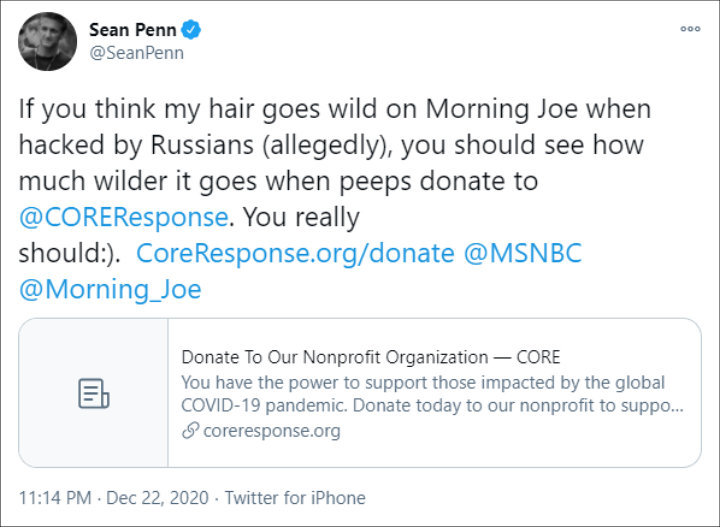 Sean Penn made a crack at his bedhead hair.

Prior to sharing the tweet, Sean made a virtual appearance on "Morning Joe" to promote his nonprofit CORE that helps provide free COVID-19 tests across the country. The "Mystic River" star's wild look in a white t-shirt during the interview, however, prompted many on Twitter to poke fun at him.

One user pointed out, "Glad that Sean Penn was able to get out of bed just in time to appear on Morning Joe. Explains the hair." Another tweeted, "@SeanPenn looking rough on @Morning_Joe. Looks like he combed his hair with a firecracker. #morning." A third chimed in, "Someone needs to buy Sean Penn a hair brush. @SeanPenn. Just saying."

Not stopping there, more people went on to make fun of Sean. One jested, "And the award for Non-Mugshot That Looks Most Like a Mugshot goes to Sean Penn! Congratulations, Sean!" Another jokingly wrote, "This picture of Sean Penn is the most accurate representation of 2020 I've ever seen." Someone else asked, "What in the actual f**k? When did Sean Penn become homeless? Is that a bird on his head?"

This is not the first time Sean made a mention about Russians. On Friday, December 18, the Mickey Cohen depicter in "Gangster Squad" tweeted, "This (allegedly) Russian hack is going to impact our lives in ways we can't yet imagine. Never a more important time for Americans to find common ground. It's time for Congress to lead by example."