The English-Australian actor and film director played the main antagonists in both the 1979 original 'Mad Max' film and its 2015 reboot 'Mad Max: Fury Road'.

AceShowbiz - Actor Hugh Keays-Byrne has passed away. The Kashmir, India-born star, best known for his portrayal of Toecutter in 1979's "Mad Max" and as Immortan Joe in 2015's "Mad Max: Fury Road", died peacefully on Tuesday, December 1, his reps have confirmed. He was 73.

Among those who were mourning the death was his "Mad Max: Fury Road" co-star Charlize Theron. Taking to her social media pages, the Imperator Furiosa depicter posted a behind-the-scenes photo of her and the late actor in full makeup and costume on the set of the post-apocalyptic movie. She wrote in the caption, "RIP Hugh Keays-Byrne. It's amazing you were able to play an evil warlord so well cause you were such a kind, beautiful soul. You will be deeply missed my friend."

The official Twitter account of "Mad Max" movie also posted a tribute to Keays-Byrne. It shared his character's famous line, "Return my treasures to me, and I myself will carry you through the gates of Valhalla. You shall ride eternal. Shiny, and chrome!" before adding, "Rest in peace, Hugh Keays-Byrne." 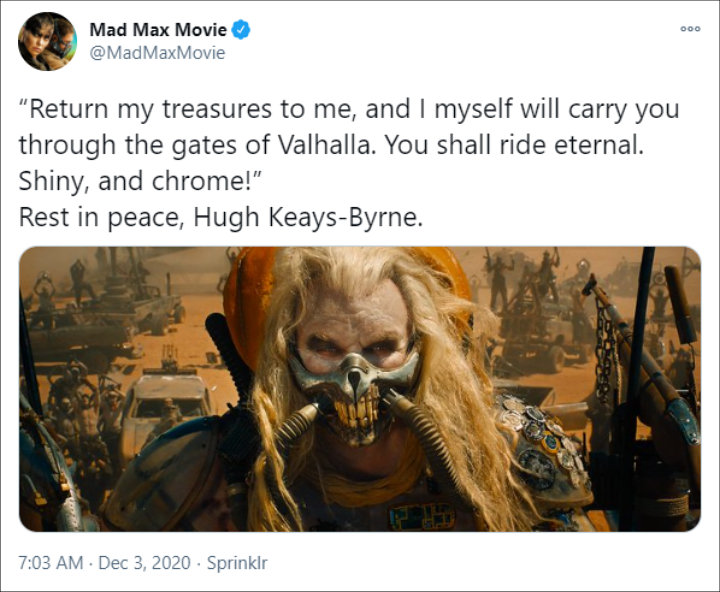 Meanwhile, director Brian Trenchard-Smith, who collaborated with Keays-Byrn on "The Dragon Flies", remembered the late actor in his Facebook post. He wrote, "Hugh had a generous heart, offering a helping hand to people in need, or a place to stay to a homeless teenager. He cared about social justice and preserving the environment long before these issues became fashionable. His life was governed by his sense of the oneness of humanity. We will miss his example and his friendship. Vale, Hugh."

Keays-Byrne was born in Srinagar, Jammu and Kashmir, British Raj (now in India) on May 18, 1947. His family moved to Britain when he was a young child. After scoring his first acting job on the program "Boy Meets Girl" in 1967, he went to Australia with the Royal Shakespeare Company in 1973 for Peter Brook's production of "A Midsummer Night's Dream" and remained in Australia when the tour ended, hence his dual nationality, English and Australian.

He appeared as Toad in 1974's film "Stone". In the original "Mad Max" movie, he portrayed Toecutter, the leader of the film's ruthless biker troupe. More than thirty years later, he played the main antagonist Immortan Joe, the oxygen-mask-wearing leader of a postapocalyptic village who uses women to birth his followers, in the reboot, "Mad Max: Fury Road".

Harry Styles Willing to Sacrifice His Comfort in Conversations About Race

Charlize Theron and Daughters Jump Off Yacht in Rare Video