The 25-year-old social media personality speaks out after her account on the adults-only platform is deactivated for offering a childhood video of her naked self.

AceShowbiz - Gabi DeMartino has addressed the controversy surrounding a naked video of herself as a child on OnlyFans. The YouTube star has come under fire as she's accused of selling child pornography on the adults-only platform.

On Tuesday, December 1, one critic demanded an explanation from the 25-year-old star. "Um @gabcake you better make a statement ASAP about this onlyfans s**t," the said person tweeted to her. "You better not be trolling with kid pics and thinking that's OKAY."

In response to the said tweet, Gabi described the video in question as "a childhood video of me on the phone sayin 'Nani says put your panties back on' and jumping up and down laughing." She admitted her mistake as adding, "I'm sorry I didn't think that one through. period."

The social media star went on explaining what prompted her to post it. "A home-video i love to share w my friends," she continued in the reply, "& i use my OF as a 'finsta' page where i share stuff as i would w friends." 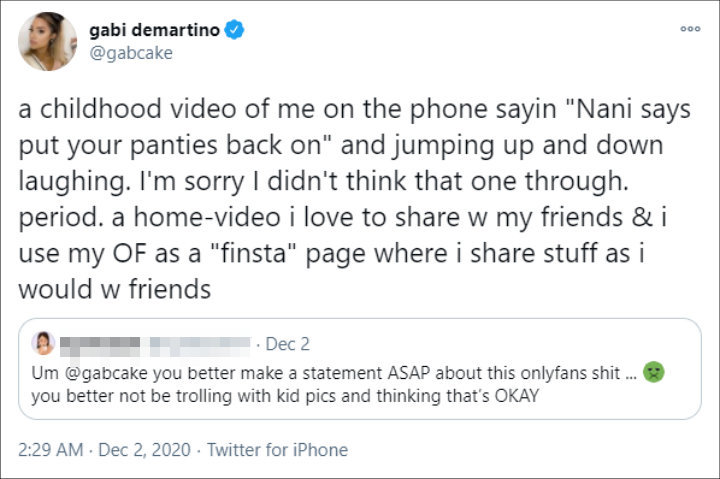 Gabi has since removed the controversial clip and reiterated her apology in another tweet. "the video was a goofy throwback family moment that I wanted to share with my personal onlyfans fancy babies," she wrote. "I am sorry that this wasn't thought out completely I apologize. The video is down now I am sorry again if this came out wrong."

The YouTube star apologized for posting the clip on OnlyFans.

On Tuesday, Gabi shocked her OnlyFans subscribers as she offered a childhood video of her naked self for $3. In the said video, she reportedly flashed the camera by lifting up her skirt. She teased the video earlier this week with a message which read, "wont put my panties on."

The video quickly drew backlash, with many accusing her of duping people into unintentionally buying and/or distributing child pornography. "Gabi Demartino posted a video on her Only Fans of herself as a toddler flashing the camera instructed by her father. She was charging $3 to view the video. This is child p*rnography, it is illegal to post and sell and buy," one person tweeted. "She manipulated her followers into purchasing this with a blurry thumbnail and the title, 'Won't put my panties on'."

Gabi initially defended the 35-second video. "Drama channels are trying to make something out of a childhood video of me, that's hilarious," she told Insider over the phone. "They're reaching."

Gabi claimed that she removed her OnlyFans account because critics suggested she was marketing inappropriate underage sexual content. However, the site later stated that it deactivated the account after violating its terms of service.