His celebratory post on Instagram comes just months after his actor brother passed away from colon cancer that he had been battling privately for four years.

AceShowbiz - One of Chadwick Boseman's brothers is winning his battle with cancer. Just months after losing the "Black Panther" star to colon cancer, Kevin Boseman took to social media to reveal that he had been diagnosed with a similar illness in 2018, and to celebrate him being in remission for two years.

The 48-year-old shared the good news via Instagram Stories on Wednesday, October 14. "Today marks my official two-year remission anniversary. October 14, 2020," he first spilled. "I was diagnosed with cancer in 2018 and underwent four rounds of chemotherapy. I'm in remission!!!!! You read right. I am in remission."

Kevin Boseman announced that he is in two years remission from cancer.

Admitting that he "only shared the diagnosis with a few people at that time," the older brother of the "Da 5 Bloods" actor explained why he finally went public about it. "I wanted to share because, while it's been a year of profound loss and tragedy for so many of us, this is good news. Something to smile about. Something to shout about," he elaborated.

Kevin Boseman explained why he decided to go public about his cancer remission.
See also...

"I hope you're smiling and shouting with me. Cancer is something most of us have no control over. We can only control our responses to it, which includes being proactive about our healthcare, both physical and emotional," Kevin continued. Urging fans to go for a check up if "something feels off," he added, "Tomorrow is not promised and early detection saves lives." 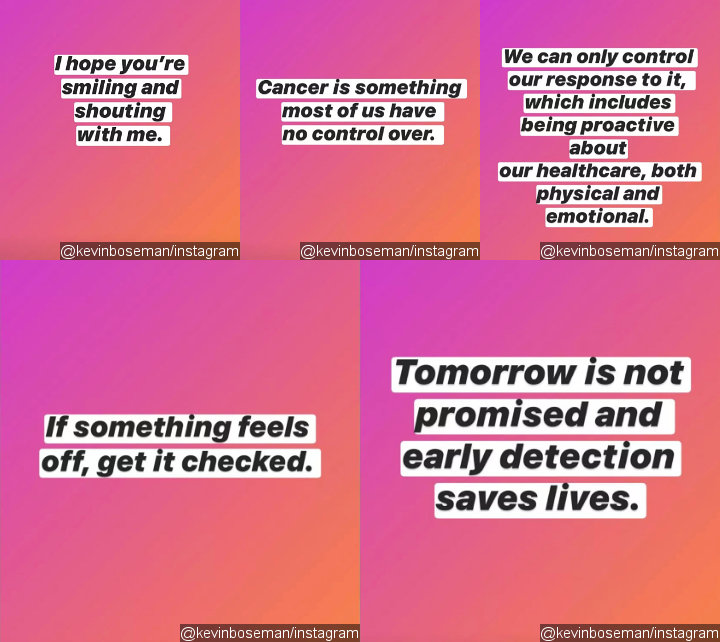 Kevin's celebratory post came just months after Chadwick passed away at the age of 43 from colon cancer which he had been battling privately for four years. On August 28, their family confirmed the devastating news through a statement posted on his social media accounts.

"It is with immeasurable grief that we confirm the passing of Chadwick Boseman," the sad announcement read. "Chadwick was diagnosed with stage III colon cancer in 2016, and battled with it these last 4 years as it progressed to stage IV."

In the wake of Chadwick's passing, Kevin shared publicly his last moment with the late actor. During an interview with the New York Times in early October, he recalled, "I have been trying to remember Chad and not Chadwick. And there's just been a lot of Chadwick in the air. You have to start sharing that person with the world; I always endeavored to just treat him like my brother."

Chadwick Boseman's Death Announcement Unveiled as Most Retweeted Post of 2020