Wolfgang Van Halen denies that he will be joining Michael Anthony, Sammy Hagar and Alex Van Halen as part of a new Van Halen, slamming the report as a 'lie attempting to capitalize on these awful times.'

AceShowbiz - Eddie Van Halen's son does not appreciate those suggesting that he will fill in his late father's position as lead guitarist in Van Halen. Shutting down speculations that have been swirling among fans, Wolfgang Van Halen argued that the rumors are actually "hurting" his family.

On Sunday, October 25, the 29-year-old shared his two cents on the matter via Twitter. "This is just a s***ty lie attempting to capitalize on these awful times. Please stop with this. Anyone peddling this s**t is not only hurting the fans, but hurting me and my family," he said when retweeting the false claim made by a fan page dedicated to him. 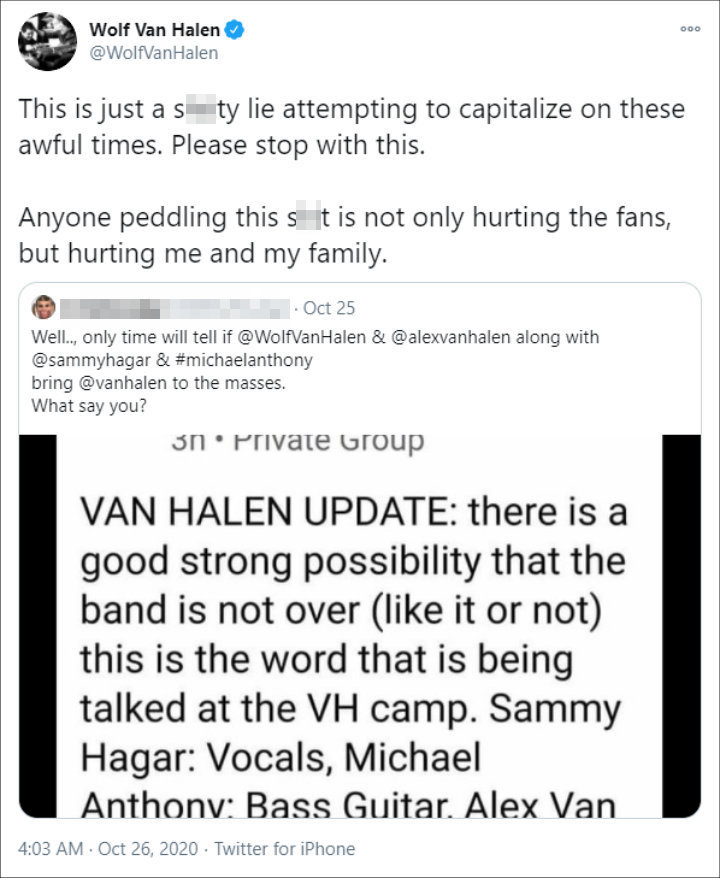 Wolfgang Van Halen shut down rumors about him replacing his father in Van Halen.

The original tweet claimed Wolfgang would join ex-bass guitarist Michael Anthony, former lead singer Sammy Hagar and drummer Alex Van Halen in the rock band's new lineup. It further suggested, "It has been mentioned that Eddie Van Halen told his son and brother, I give you my blessing....."

The rumors emerged less than a month after Wolfgang announced on social media that his father passed away at the age 65 after a years-long battle with cancer. "I can't believe I'm having to write this, but my father, Edward Lodewijk Van Halen, has lost his long and arduous battle with cancer this morning," the musician wrote on the October 6 post.

"He was the best father I could ever ask for. Every moment I've shared with him on and off stage was a gift. My heart is broken and I don't think I’ll ever fully recover from this loss," he continued. "I love you so much, Pop."

Back in July, Wolfgang turned to Instagram to answer a question if his father's reputation was "a gift or a curse." He explained, "It's really equally both. Being who I am, I think people at the least will be interested in what my work will sound like, which is very nice. But on the other hand, if it's not exactly what they want to hear or if I don't try to sound 'Van Halen-y' enough for them they'll hate me and won't give me the time of day."