The Queen and her grandson visit the Defence Science and Technology Laboratory to 'view displays of weaponry and tactics used in counter intelligence' in addition to meeting 48 staff members at the lab.

AceShowbiz - Amid the ongoing COVID-19 pandemic and the importance of wearing masks in public, people might have expected the royal family to set an example for others. So, when Queen Elizabeth and Prince William attended an royal event event in Porton Down, southwest England on Thursday, October 15 without masks, the backlash is almost immediate.

In the event, which marked the Queen's first public outing since March, the 94-year-old monarch and the Duke of Cambridge were joined by an executive from The Defence Science and Technology Laboratory (Dstl). They visited the Defence Science and Technology Laboratory to "view displays of weaponry and tactics used in counter intelligence" in addition to meeting 48 staff members at the lab.

However, people noticed that none of them was wearing a face covering which is extremely essentials amid the pandemic. The U.K. government also recommends people to wear mask in indoor places where "social distancing may be difficult and where you will come into contact with people you do not normally meet."

"should they all have had a mask on? Setting an example to the British public?" one critic wrote on Twitter upon seeing the pictures from the event. "The Queen, a future King and a policeman - but no mask in sight... Should they be setting an example and wearing one?" another person questioned.

Someone else added, "Lovely to see the Queen but I think this was really really poor judgement - I don't care your majesty that you can sort out tests for everyone there - the royal family should follow rules just like the rest of us - in fact more so so they set an example." One other user also slammed the royal, "So essential workers who are around Covid patients day and night dont get tested but the Queen cant wear a mask so they test everyone around ger for a pr visit?"

The Buckingham Palace later explained that the Queen decided to not wear a mask after consulting the queen's medical. "Specific advice has been sought from the medical household and relevant parties, and all necessary precautions taken, working closely with [the laboratory]," read the statement. It was also said that "all the staff at @dstlmod were tested for coronavirus before The Queen’s visit - and all returned negative results." 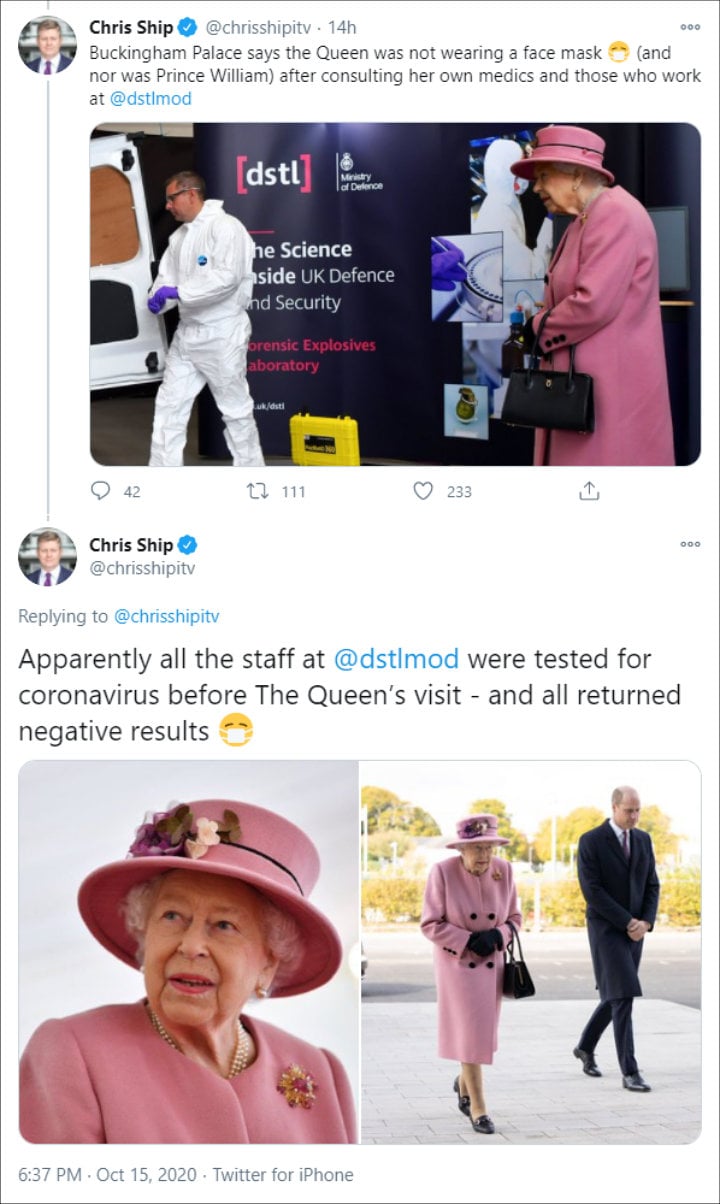 The Queen allegedly opted out a mask after consulting her medical team.

Despite that, people were still dragging the royals. "Wonderful. And every person who sets their eyes in these images will know that immediately won't they? No," someone wrote. Echoing the sentiment, another user commented, "So people are going to see these images and think 'queen doesn’t bother. Why should I.' "'

Queen Elizabeth Mourning the Death of Her New Puppy