In a statement issued on Instagram Stories, the 'Umbrella' singer makes it clear that she doesn't 'play with any kind of disrespect toward God or any religion.'

AceShowbiz - Rihanna has broken her silence after being criticized for using a song that contained sacred Islamic verses at her latest Savage x Fenty fashion show. The singer and businesswoman took to Instagram Stories on Tuesday, October 6 to apologize to her muslim fans over her and her team's decision to use the song during the show.

Rih began by thanking the Muslim community for pointing out their mistake, which she called a "huge oversight that was unintentionally offensive in our savage x fenty show." The Grammy winner later added, "I would more importantly like to apologize to you for this honest, yet careless mistake."

"We understand that we have hurt many of our Muslim brothers and sisters, and I'm incredibly disheartened by this! I do not play with any kind of disrespect toward God or any religion and therefore the use of our project was completely irresponsible!" Rih went on saying, promising that this kind of thing would not happen again in the near future. "Moving forward we will make sure nothing like this ever happens again. Thank you for your forgiveness and understanding." 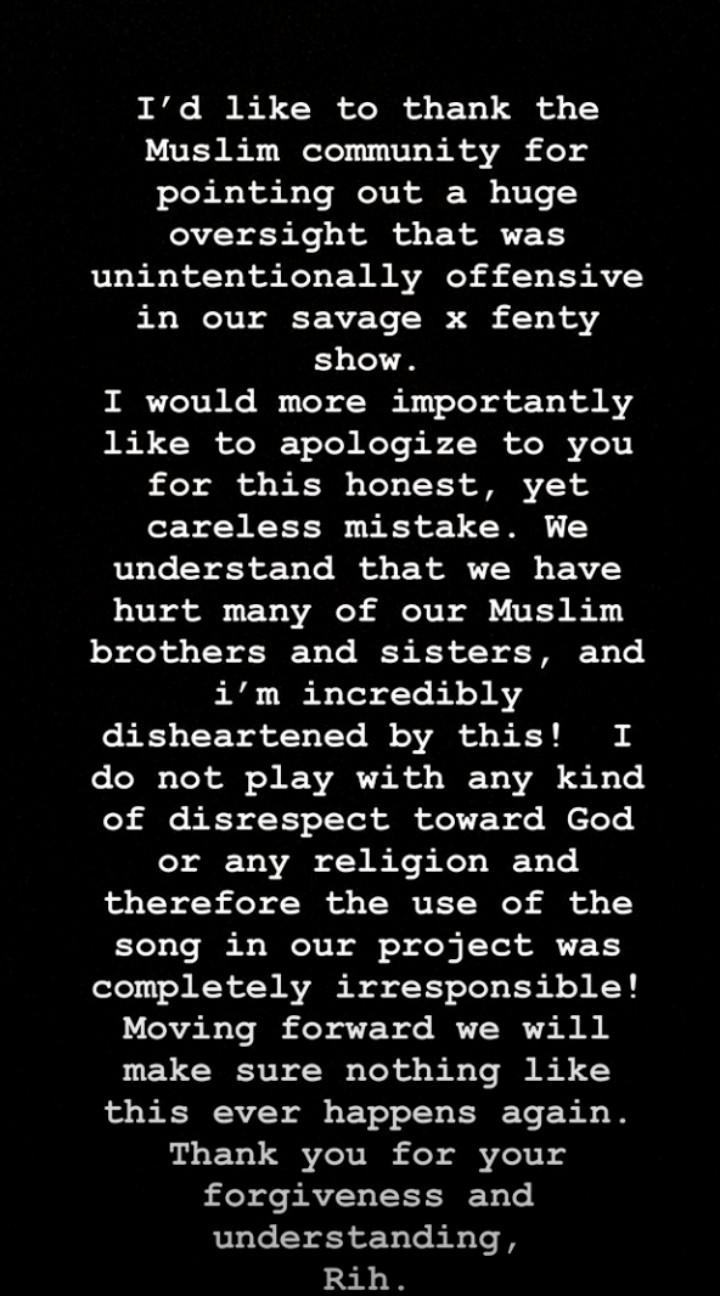 Rih previously faced backlash fans noticed that one of the songs played during her fashion show, "Doom", contained a hadith explaining the end of the times. Those who were not having it were quick to criticize the "Umbrella" singer, with one saying, "The fact that the song is called 'Doom' & the hadith is about the end of times? @rihanna, you're cancelled I don't care."

Meanwhile, another person pointed at the fact that Rih used to date Hassan Jameel to attack her, "she dated a saudi guy for years ! the hadith she used is about doomday when the song is called doom ... TRY AGAIN. rihanna f**ked up." One other told Rihanna to use her own songs rather than the controversial track, "hey rih why did u choose doom song for your show???It's hurt to know that. Your songs are amazing and have nice lyrics. It's better to play ur own songs than THAT DOOM."

Dr. Dre vs Diddy on 'Verzuz' May Totally Happen

Cardi B Unfazed by Criticism of Her Racy Lyrics: 'I'm Not Hurting Nobody'

Harry Styles Reflects on His Solo Debut: I Was Scared to Get It Wrong