Following Melissa McCarthy and Jennifer Aniston, the Bronx diva has been confirmed to receive the award for 'single-handedly increasing Latinx representation in music, film, television, and fashion.'

AceShowbiz - Jennifer Lopez is set to add another illustrious award to her resume. Having collected the Icon Award at the 2014 Billboard Music Awards and the Michael Jackson Video Vanguard Award at the 2018 MTV Video Music Awards, the Bronx diva was announced to be the third Icon Award recipient at the 2020 E! People's Choice Awards.

The selection of the 51-year-old singer/actress for the special recognition was announced by E! on Wednesday, September 30. She was being recognized for "her iconic performances on stage and on screen," which included her co-headlining performance at the 2020 Super Bowl halftime show as well as her critically acclaimed portrayal of Ramona Vega in 2019's "Hustlers".

The "Let's Get Loud" songstress had been nominated multiple times at the People's Choice Awards. Back in 2017, she won the Favorite TV Crime Drama Actress kudo for her role on "Shades of Blue". This Icon Award honor put her in the same list with "Ghostbusters (2016)" actress Melissa McCarthy and former "Friends" star Jennifer Aniston, who collected the gong in 2018 and 2019 respectively.

In the announcement, Jen Neal, General Manager of E! News, Live Events & Lifestyle Digital, stated, "Jennifer Lopez has an unmatched global appeal and for more than two decades, has given us some of the most iconic, unforgettable performances of all time. For paving the way for artists around the world and single-handedly increasing Latinx representation in music, film, television, and fashion, we're honoring Jennifer Lopez with The People's Icon of 2020."

About the honor, Lopez herself has expressed her gratitude via a Twitter post. "Thank you thank you!!!! So honored!!!!! @peopleschoice @enews," Alex Rodriguez's fiancee, who will next be seen starring opposite Maluma and Owen Wilson in "Marry Me", tweeted her reaction later the same day. 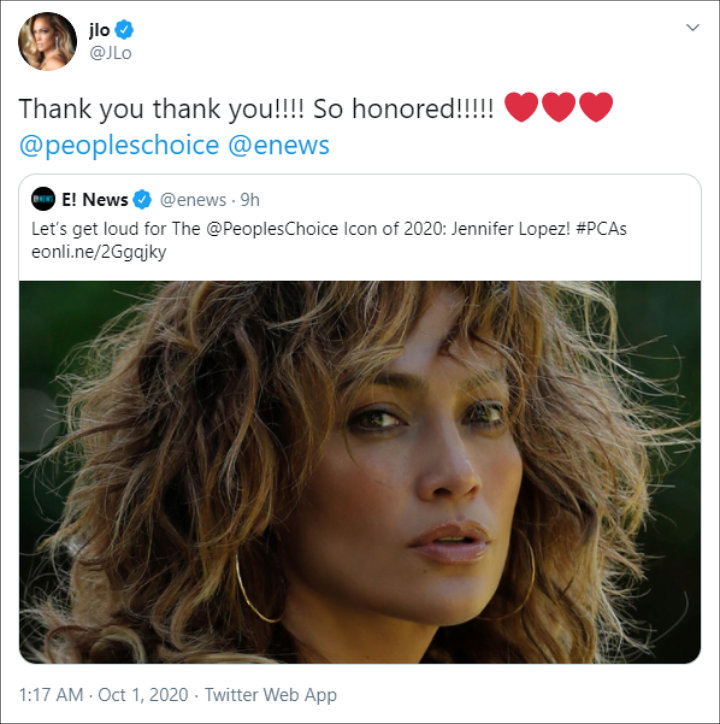 The 2020 E! People's Choice Awards will be aired live from Barker Hangar in Santa Monica at 9 P.M. on Sunday, November 15. It will have Den of Thieves serving as its producer with Jesse Ignjatovic, Evan Prager and Barb Bialkowski taking executive producer roles. Voting will be opened on October 1.

'Masked Singer' Recap: The Gremlin Is Revealed as Oscar Nominee in Self-Elimination

Jennifer Lopez and Alex Rodriguez Endorse Joe Biden: It's About Reunifying and Rebuilding the Nation

Jennifer Lopez's Daughter on Performing at Super Bowl With Mom: I Just Don't Overthink It