Lauren Jauregui Still Insists 'Politics Aren't Going to Save' the U.S. Despite Backlash

It all starts after the Fifth Harmony member calls both Donald Trump and Joe Biden 'two completely incompetent, unqualified males debating which one has a bigger ego.'

AceShowbiz - People across the nation are currently tuning into television to watch the first debate between Donald Trump and Joe Biden, though Lauren Jauregui isn't one of them. Instead, the singer let it be known that she refused to watch the debate because she believes politics are not going to save the United States, leading to her facing backlash.

Lauren used her Twitter account to bash both the president candidates. "Tbh I ain't even watching it. I know what it is. Two completely incompetent, unqualified males debating which one has a bigger ego," the Fifth Harmony member said in the Tuesday, September 29 post, adding, "Politics aren't going to save this nation. Look into local grassroots orgs and mutual aid programs and GET TO WORK if u wanna see change." 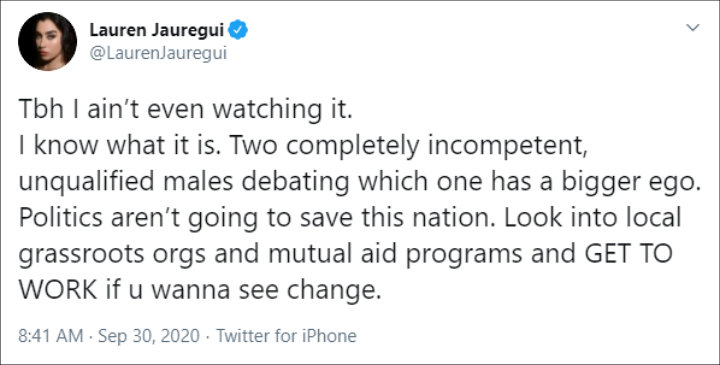 People were not having it as they assumed that Lauren told her followers not to vote in the upcoming election. "It's unfortunate that the people that have the biggest platform use it so recklessly. Please inform yourselves. Please go vote," one criticized her. "This is so irresponsible and stupid. OBVIOUSLY these aren't the candidates we would've preferred but we still need to vote and choose the lesser evil. politics affects this nation whether you believe it or not. don't be an idiot. vote for biden," another wrote.

Someone else said, "You are so f**king removed from reality. politics is all we HAVE RIGHT NOW YOU A**HOLE. SHUT UP AND ENCOURAGE PEOPLE TO VOTE." Meanwhile, an individual had this to say, "You think you did something with this tweet but you just sound dumb..... our future is in their hands and this is what you tweet......."

Instead of apologizing over the tweet, Lauren stood by her statement and clarified that she never told people not to vote. Rather, she still wanted to encourage people to vote, though she doubted that it'd do anything better for the country. "Y'all can be mad at me for telling the truth if you want. You can all vote and you'll see plenty of content over the next few months of me letting u know voting Biden is a 'better' option; but I stand by what I say. Politics will not save us. This is clearly NOT about the people," she said. 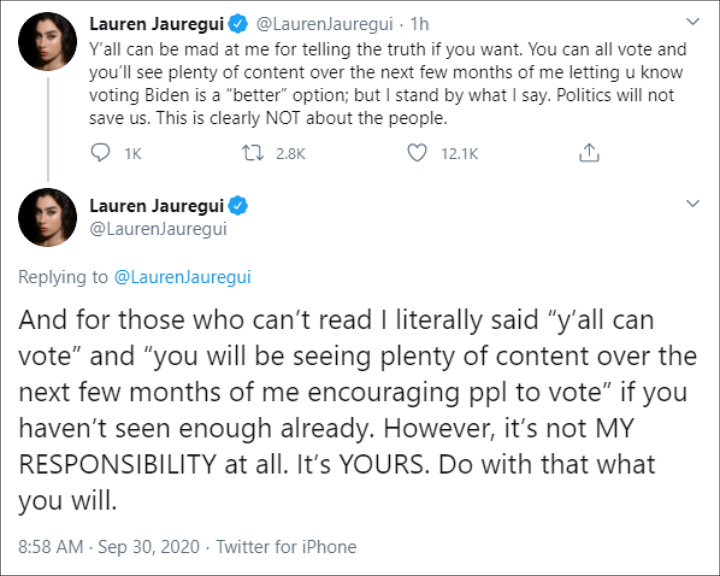 Lauren continued, "And for those who can't read I literally said 'y'all can vote' and 'you will be seeing plenty of content over the next few months of me encouraging ppl to vote' if you haven't seen enough already. However, it's not MY RESPONSIBILITY at all. It's YOURS. Do with that what you will."