Alongside the black-and-white photo, the British singer expresses how happy he is over the birth of their daughter as he says, 'The love i feel for this tiny human is beyond my understanding.'

AceShowbiz - Gigi Hadid is officially a mom! Following rumors that the supermodel has given birth to her first child with Zayn Malik, the British singer confirmed the speculation through a post shared on Twitter on Wednesday, September 23.

Not only confirming the happy news to his social media followers, but Zayn also shared the first glimpse of the little bundle of joy. In the black-and-white photo shared on the blue bird app, the former One Direction member could be seen holding his daughter's tiny hand. He said in the caption, "Our baby girl is here, healthy & beautiful."

Expressing how happy he is over the birth of their daughter, Zayn added, "to try put into words how i am feeling right now would be an impossible task. The love i feel for this tiny human is beyond my understanding.Grateful to know her, proud to call her mine, & thankful for the life we will have together x." 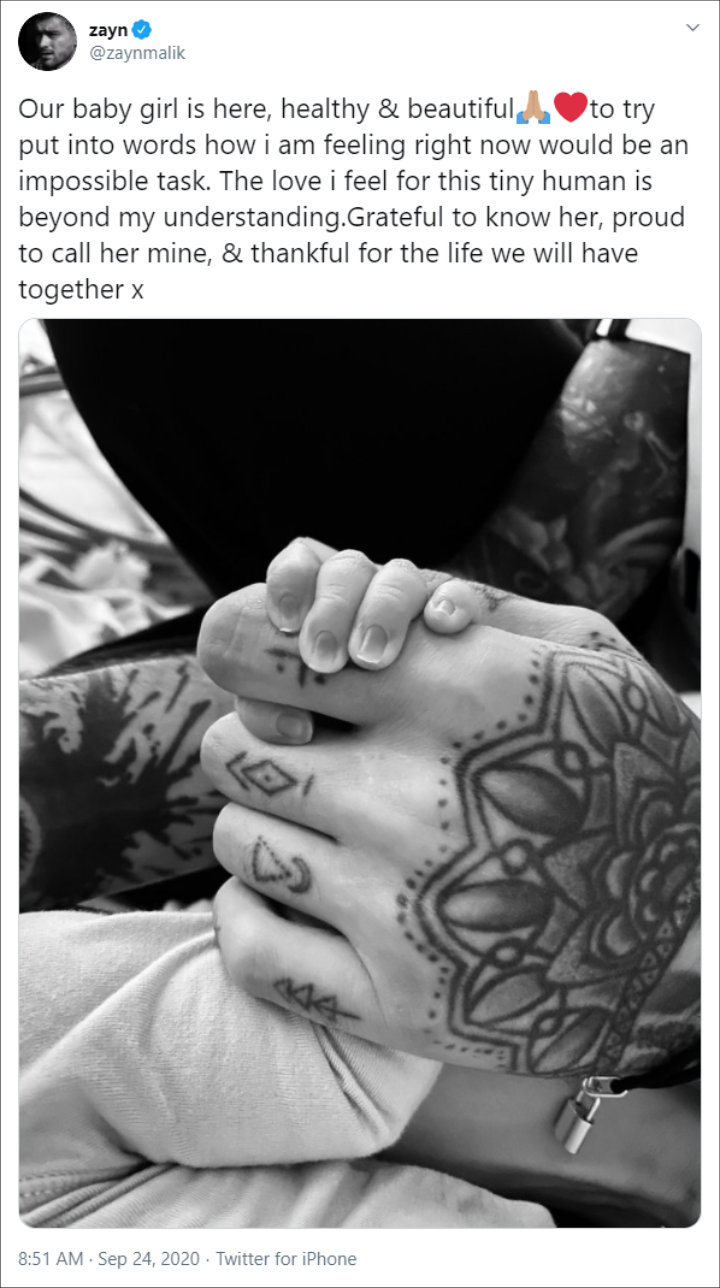 Zayn Malik shared a photo of him holding his daughter's tiny hand.

People first speculated that Gigi had given birth after his father, Mohamed Hadid, wrote a heartfelt tribute to the latest addition in their family. "Hello little grandchild, it is me," he said. "My heart as happy as can be. I wish for you the sun and moon. I wish for you a happy time. Know that Grandpa's always near, I'll do anything, anything for you my dear. When I heard you were on the way, I smiled and wiped a tear away. I cried the tear because I knew my heart would always belong to you."

Gigi confirmed she was expecting a child with her on-again boyfriend earlier this year. During her appearance on "The Tonight Show Starring Jimmy Fallon", the blonde beauty thanked those who supported them and shared how it felt like to be pregnant during quarantine. "Especially during this time, it's a nice silver lining to be able to be home and be together and really experience it day by day," she said at the time.