Following backlash for saying that she nearly slaps an eldery woman in what appears to be an airport, the rapper takes to Twitter to address all the controversies surrounding her.

AceShowbiz - Mulatto has had enough. Having landed in hot water for multiple things, the rapper has finally broken her silence as she hit back at her critics who apparently can't stop roasting her for mocking her dark-skin friend and threatening an eldery woman.

It all started after Mulatto posted on Instagram Stories a video of her complaining about the service she received from an eldery woman in what appeared to be an airport. Recording the said person doing her job, she said, "If this is your grandma, she almost got slapped today." Mulatto added in the caption, "If this yo rude a** grandma tell her to fix her nasty a** attitude ASAP."

People, naturally, were not having it. "Wow so disrespectful. I would never in my life put a random elderly woman on blast for social media," one person said. "She still an elderly women , anybody that's from the south knows you never disrespect your elders," another noted, while one other commented, "The disrespect for older people is disgusting. That ain't cute."

Mulatto caught wind of the criticism, and considering all the backlash she received for calling her dark-skin friend "orang utan," she apparently decided to address them all at once. Taking to her Twitter account over the weekend, the female emcee vowed, "Ian even gone make no more IG stories y'all got it bruh ion want it if I can't be myself." She then added, "If I wasn't a rapper I'll delete all social media right now ON GOD."

Not stopping there, Mulatto lamented the fact that she could not do anything she wanted without having people attack her. "I can't have roast sessions w my friends, I can't pay my bills, I can't defend myself from disrespectful ppl... lmao like f**k this s**t for real," she said. 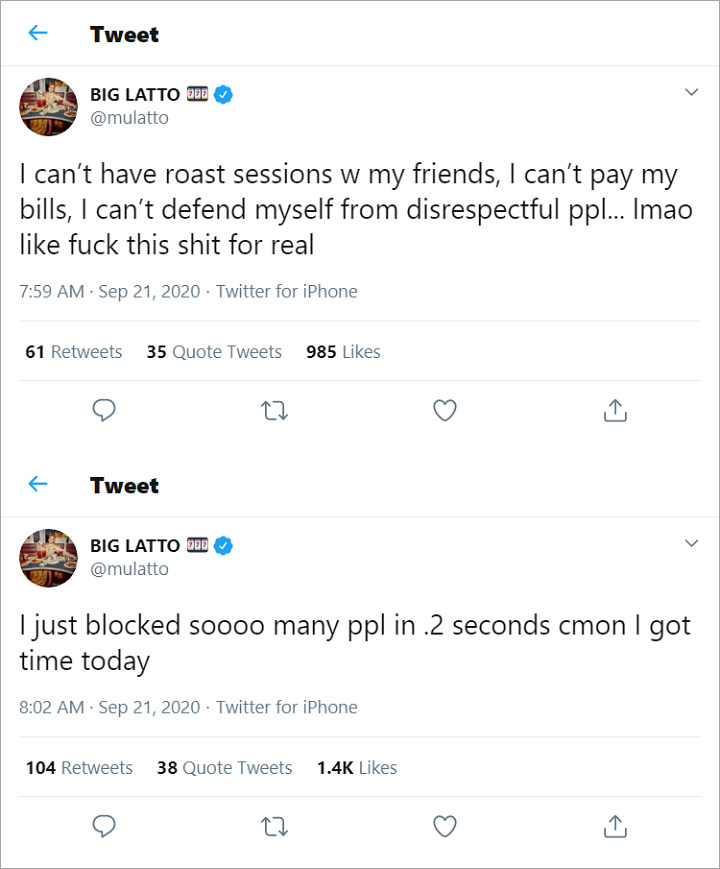 In a separate tweet, Mulatto said that she decided to block all the critics coming at her. "I just blocked soooo many ppl in .2 seconds cmon I got time today," so she wrote on the micro-blogging site.

Mulatto Fires Back After Being Trolled Over 'Dirty Feet'

Mulatto Changes Her Moniker Because It's Not 'Worth It Anymore'