In an interview, the reality TV star admits she doesn't like how she's being painted 'as some sort of drug addicts' when she uses valium as anti-anxiety medication.

AceShowbiz - Hannah Ferrier is not hiding her disappointment over her surprise firing from "Below Deck Mediterranean". The reality TV star opened up in a new interview that she did not like how she was portrayed "as some sort of drug addicts" on the Bravo series since she used Valium as anti-anxiety medication.

Sharing her thought on her exit after the airing of the Monday, August 17 episode, the 33-year-old admitted to Decider, "I'm actually just really disturbed. I think especially seeing how it played out." She added, "I think I've just been really disappointed because I feel I'm being painted as some sort of drug addict or what have you."

"Which is just so sad, because there are so many people in the world that suffer from mental illness," she went on to state. "And it's 2020. We shouldn't be making people feel like a lesser for taking medication for mental illness. Or making them feel like they can't do a job, or they can't do what normal people can do."

Hannah was discharged from being a member of The Wellington crew by Captain Sandy Yawn after unregistered Valium and a CBD vape pen were discovered in her belongings following a report by bosun Malia White. However, she defended herself on Twitter days before the airing of the August 17 episode that her Valium was "prescribed" and the CBD is "legal in Spain." 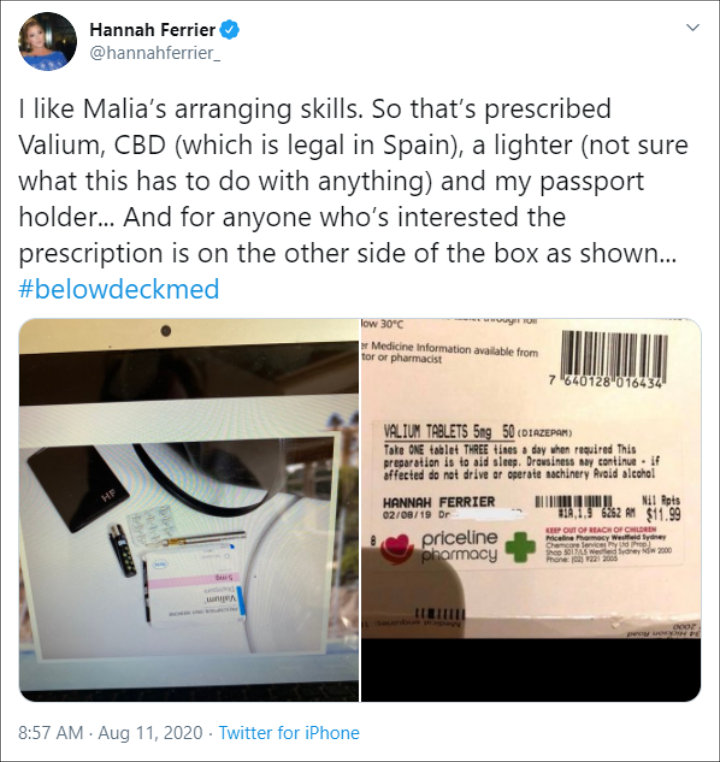 Hannah Ferrier defended herself on Twitter that her medications were legal.
See also...

In another tweet, Hannah responded to a fan's speculation on what happened between her and Malia that led to her firing. "No...she went into my cabin AFTER we had the fight about cabin arrangements...Then went through my handbag and took a photo of my prescribed medication and legal CBD and sent it to Sandy," she clarified. 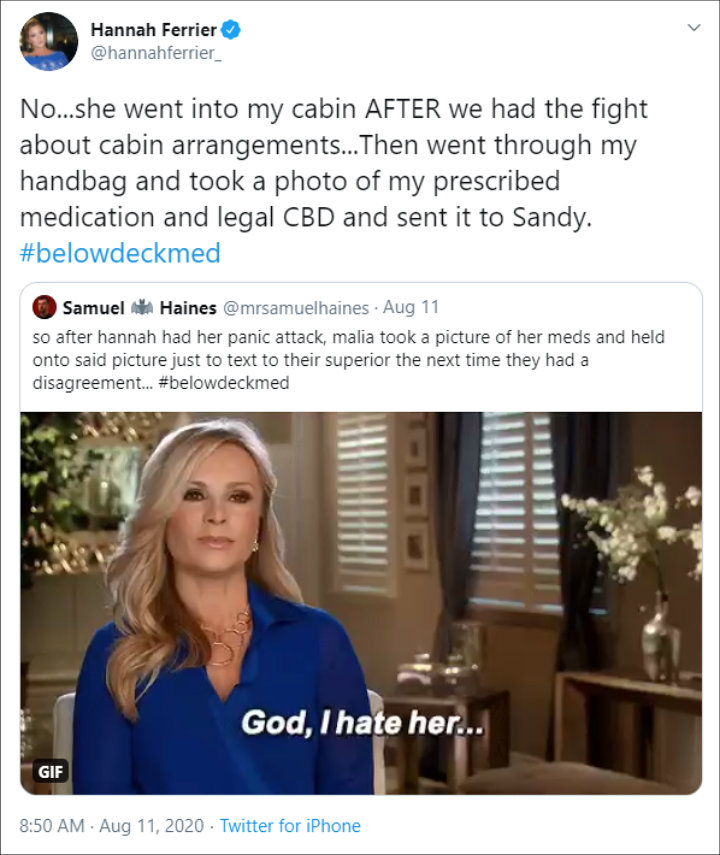 Hannah Ferrier responded to a fan's speculation on what happened between her and Malia White that led to her firing.

During her chat with Decider, Hannah was asked about her reaction when she watched the whole incident portrayed on the show. "Obviously when I'm in the moment, it's very confronting. It's very shocking," she responded. "I think especially just saying things like, 'Is she flushing the drugs?' "

"You can see on my face when she opens that bathroom door. My pants are undone. I'm going to the bathroom. I'm like, why would I flush my medication? But it wouldn't have crossed my mind to flush Valium, because I don't think I'm doing anything wrong," she elaborated. "It's anti-anxiety medication. It's like, it's five milligrams of Valium! It was just disappointing."

Though insisting that Valium is not something she was hiding, Hannah did accept that she made a mistake by "not clearing it when I brought it on the boat." On the reason why, she explained, "Because I've always had it, every year. It just wasn't really a process that went through my mind. That was my mistake. But yeah, it certainly wasn't something I was trying to hide."

Asked what she would have done differently had she have the opportunity, Hannah replied, "Obviously, I would have declared the medication when I went on board. If I knew it was going to turn out like this, I probably just wouldn't have done the season."

Justin Bieber Hits Back at Doctor for Correcting His Medical Advice: 'F**k Off'