In response to fans' demand for the removal of the 'Keeping Up with the Kardashians' star from the video, the 'Bodak Yellow' hitmaker reminds, 'This is not about f**kin race.'

AceShowbiz - Cardi B has defended Kylie Jenner amid a fan petition to have the reality star removed from the rapper's "WAP" music video.

Cardi and Megan Thee Stallion dropped the video for their collaboration on Thursday (August 06), featuring an array of famous faces including Normani Kordei, Rosalia and Kylie, who struts her stuff around the house in a plunging leopard-print bodysuit and matching cape.

However, the reality star's appearance riled fans, who headed online to demand her removal and, after a Change.org petition was started over the weekend, labeling Jenner a "culture vulture," the "Bodak Yellow" star hit back on Twitter, insisting, "Not everything is about race."

"Normani did ALL this and Kylie walked down the hall and opened a door. If that's not a perfect visual indication of Black women having to do the most..." wrote one fan, prompting the hitmaker's response.

"Normani is one of the best female artist that dances like she dances her f**kin ass off!" Cardi wrote. "Why would she open a door? Please tell me how that would make sense? The best part of the song is the beat and hook, it what makes you want to shake your a**."

She continued, "Not everything is about race. Theres issues out here in the world that is about race and I preach all the time about. This is not about f**kin race." 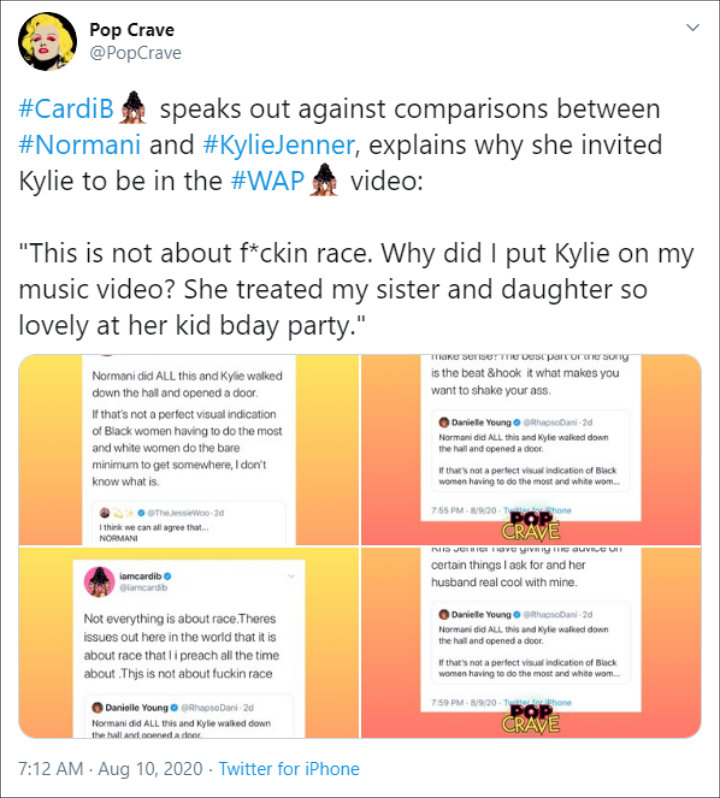 Cardi B clapped back at backlash over Kylie Jenner's cameo in 'WAP'.

"Why did I put Kylie on my music video? She treated my sister and daughter so lovely at her kid's bday party," Cardi insisted in a final tweet. "Travis (Scott, Kylie's ex) and Set (Offset, Cardi's husband) are real close and Kris Jenner have given me advice on certain things I ask for and her husband real cool with mine."