The younger brother of the YouTube star, Dawaine Sails, lets his followers know that they haven't heard from his brother since news broke that he was hit by a drunk driver.

AceShowbiz - Chris Sails' whereabouts remain a mystery, one day after his family and friend claimed that he got into a car accident. The YouTube star appears to be missing since he's reportedly hit by a drunk driver on Thursday, August 6.

On Friday, Chris' brother Dawaine Sails once again took over Chris' Instagram account to give an update on their search of his brother. Instead of bringing good news, Dawaine wrote on Instagram Stories, "Still no response from my big brother [a crying emoji]. If you hear something please let me know." 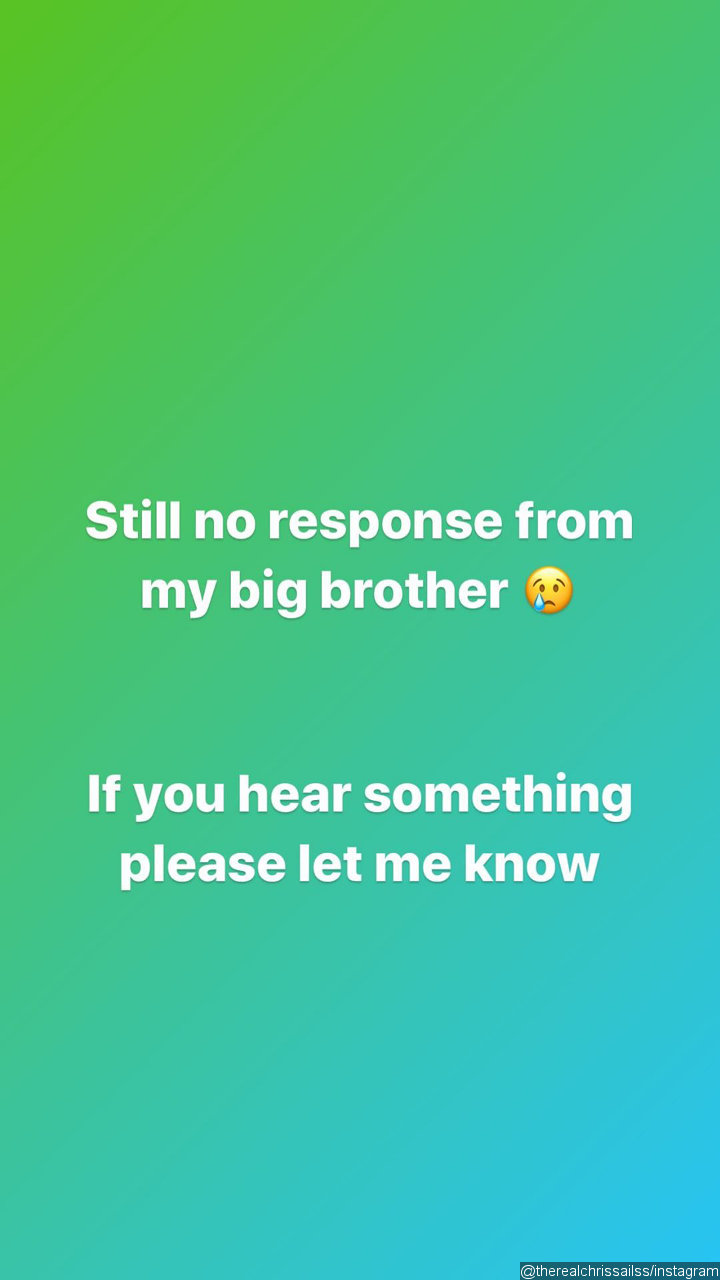 Chris Sails's brother gave update on the search of the missing star.

A concerned fan responded, "I hope hes okay." Meanwhile, some skeptical users alleged that it's just a scenario to gain "Clout," while another expressed her doubt about Chris' supposed disappearance as saying, "lol ion believe him."

Chris' friend Jordan Lacey first broke the news of the alleged incident that may harm the YouTube star on Thursday. Hinting that he knew very little about it, he posted on his Instagram page along with a selfie of him with Chris, "If anybody got any info on my brother DM now please I got a call that he got hit by a drunk driver. I'm trying to find out more info hope you good brother pull through."

He repeated the info and his plea on Instagram Stories, writing, "I got a call that my big brother Chris was hit by a drunk driver if anybody got any info dm me pull through bro I love you."

Later, Chris' brother Dawaine reposted Jordan's Instagram Story post on his own account and told his followers, "I'll keep y'all updated." He also posted on his brother's personal account, "This Chris lil bro ! If anybody hear from my brother dm me ! He was in a car crash and he not answering the phone! Please keep him in prayers !!!" He added in the caption, "Already called police and hospitals !! Dm me if you hear from him @dawainesails."

People have been sending their prayers for the YouTube star, with one commenting, "Hoping hes okay." Another had a similar wish, "I Hope Chris good." Someone else remarked, "This His 2nd Car Accident I Hope Hes Okay Damn."

Some others, however, were not convinced that Chris has been involved in a car accident, considering how he often pulled a prank for his YouTube channel. "Y'all forever faking sum sht nobody believe y'all if sum real. Cause now idgaf," a skeptical user wrote. "This is for clout lies," another accused. One person similarly claimed, "Chris said fake like I got hit by a car so I can get baby cj back bunch of bs." Someone warned others, "This a whole damn lie. Don't fall for it."

Interestingly, Chris' ex-wife Queen Naija doesn't seem to be worried a bit about him. She keeps posting her pictures on Instagram like nothing happened to the 24-year-old, who is the father of her son named Chris.