The tense between Joe and Logic starts after the former mocked the latter for announcing retirement earlier this year to focus on his little family after welcoming his son.

AceShowbiz - Logic and Joe Budden have been involved in a back-and-forth. The Maryland rapper previously said that the podcast host's hurtful comments about him made him suicidal. Now, Joe has responded to Logic's claims. Instead of being sympathetic to the "No Pressure" hitmaker, Joe further slammed Logic.

He addressed the matter on his Twitter account on Saturday, August 1. "Logic is reverse bullying me lol," so he said. He also responded to a fan who joked at Logic's expense. " 'Joe Budden made me wanna kill myself!!' He did that for everyone that listened to his music bro you're not special smh," the fan tweeted, to which Joe replied, "Lmao can you chill out man." 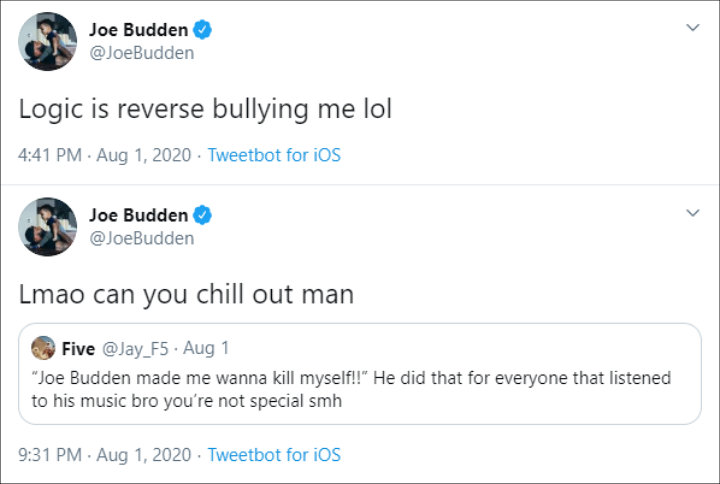 The tense between Joe and Logic started after the former mocked the latter for announcing retirement earlier this year to focus on his little family after welcoming his son with wife Brittney Noell. During the July 18 episode of his "Joe Budden Podcast", the host called Logic "one of the worst rappers to ever grace a microphone." He added, "Let's celebrate Logic getting the f**k out of here."

Joe, however, issued an apology to Logic, saying in another episode of his podcast, "I'm sorry man. Last week, I came in here feeling pretty tumultuous. Fresh out of Twitter jail, unable to properly read the room. And just hating myself and life, honestly. Unfortunately, I projected some of that onto you, Log. And for that, I want to apologize."

Logic later discussed criticism from Joe during his interview with Hot 97's Peter Rosenberg. "He doesn't like me for whatever reason," the rapper said. "He wants to say I'm not black enough, I'm not good enough."

He then claimed that Joe is "a person who's led to part of my depression, some of my darkest spaces." He continued saying, "Your words, they make people want to kill themselves bro."