The 'Suicide Squad' star sparks dating rumors with the model daughter of Cindy Crawford as they get handsy and share a hug while joining the protest in downtown Los Angeles.

AceShowbiz - Cara Delevingne has probably moved on after breaking up with Ashley Benson by dating another blonde beauty. The English actress/model sparked dating rumors with Kaia Gerber after the two were spotted joining a Black Lives Matter protest in Los Angeles on Wednesday, July 15.

As if the two celebrities' participation was not drawing attention enough, they raised suspicion about the nature of their relationship as they got affectionate while joining protesters in the street. At one point, the "Paper Towns" actress and the 18-year-old model were holding hands. Kaia also sweetly embraced Cara as she stood behind her rumored girlfriend and placed her hands across Cara's chest, while the 27-year-old rested her head on Kaia's shoulder. 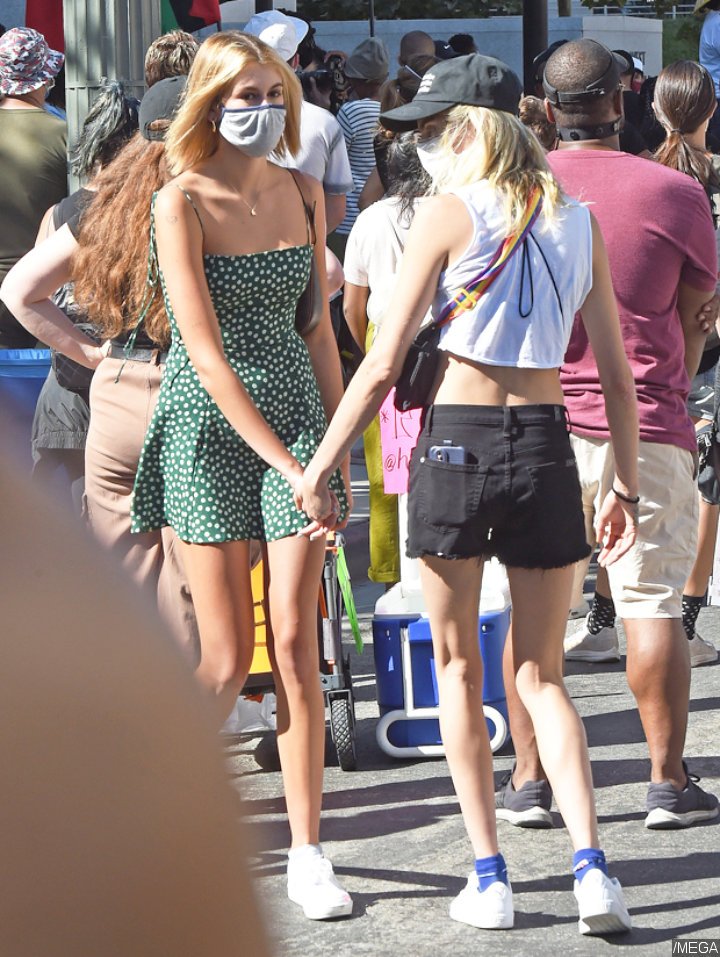 Cara rocked a while crop top and a pair of shredded Daisy Duke with white sneakers and a black hat. Kaia, meanwhile, was effortlessly chic in a green, floral patterned mini dress with spaghetti straps, also teamed with a pair of white sneakers. Both of them were wearing a mask to follow the COVID-19 guidelines.

Cara's sighting with Kaia comes more than two months after she split from Ashley Benson after almost two years together. The former couple was last spotted together prior to breaking up in March, when they went on a shopping trip. Interestingly, they were joined by Kaia at the time.

Ashley has quickly moved on from their split by dating G-Eazy, sparking backlash from Cara's fans who thought that it was too fast for Ashley to jump into a new relationship. Defending her ex, Cara wrote on Instagram Stories, "It's more important now than ever to spread love, not hate." She went on imploring to her fans, "To everyone hating on @ashleybenson please stop. You don't know the truth, only her and I do and that's exactly how it should be."

A source recently told HollywoodLife of Ashley and G-Eazy's relationship, "They're a full-on couple now. It just sort of happened because they like being together so much. They've barely gone a day without seeing each other in the past month."

"[Ashley and G-Eazy's] lives have been slowed down by all the COVID-19 restrictions, so they have had the chance to hang out more than usual, and are getting to know each other better," the so-called insider added. "G-Eazy often wants to be in a relationship, but then he goes on tour and temptation sets in. The thing with Ashley is that he really finds her very fun and cool, and very unique, and realized that they work as a couple."