It's reported that the elderly man whom the professional wrestler punched during the altercation at a Texas restaurant suffered injuries and had to be transported to a hospital.

AceShowbiz - Mike Perry caused a ruckus in a Texas restaurant on Tuesday night, July 7. The UFC star got into a physical altercation when he and his girlfriend, Latory Gonzalez, were enjoying dinner at the Table 82 restaurant in Lubbock, Texas around 10:30 P.M, and the altercation was caught on video.

In the clip that made rounds online, Mike and his girlfriend was seen leaving the restaurant as he yelled at a person with whom he apparently had an argument. However, just when the two reached the exit, Mike refused to leave the restaurant and prompted his girlfriend to talk some sense into him. More people tried to calm him down later on, including an elderly man who apparently got on his nerves.

Mike was later seen knocking out the elderly man, before sitting on a ledge and challenging the witnesses to call the cops on him. He also dropped several N-bombs, but it wasn't directed at any black people in the restaurant.

Following the altercation, Mike went on to Twitter to share several cryptic messages that suggested he didn't regret what he had done during the commotion. "I hope judgement day is coming. I hope all you filthy mouth losers burn in the s**thole sewers of hell. All you will see, smell & hear is nightmares of vomit and feces drowning you for eternity. Your life sucks so you hate on beauty you will never have but it will only get worse," he wrote in one tweet.

Mike then followed it up with a tweet that read, "If you see us in public and you get too close, I'm gonna hit you. Social distancing says you gotta stay 6 feet away from us. You come in my bubble you getting Sparta kicked in the nuts and f**kin stone cold stunnered b***h !" 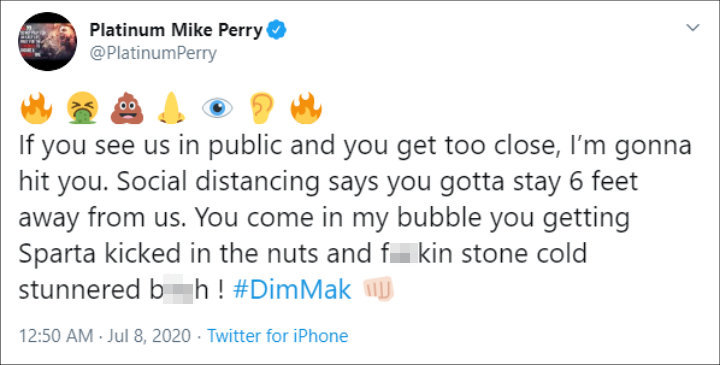 TMZ revealed that the elderly man whom Mike punched suffered injuries and had to be transported to a nearby hospital. The site also reported that cops did come in the end, but they did not arrest the professional wrestler. Meanwhile, the restaurant allegedly is considering pursuing a theft charge since he left the restaurant without paying his bills.