The president reposts on Twitter and Facebook a video of a black boy being chased by a white boy with a fake CNN text that reads, 'Terrified todler [sic] runs from racist baby.'

AceShowbiz - Donald Trump is no stranger to making a controversial tweet and he did it yet again with one of his latest posts. On Friday, June 18, the president's post of a "racist baby" video was flagged by Twitter for containing "manipulated media."

Trump's tweet in question featured a twisted version of viral video which shows a little black boy running away from a white boy who appears to be about the same age. It has the official CNN logo on the screen and text towards the bottom that reads, "Terrified Todler [sic] Runs From Racist Baby." The video then cuts to a black screen and features text that says, "What actually happened."

After showing the two little boys simply playing with one another, the black screen appears again with a message that reads, "America Is Not The Problem - Fake News Is - If You See Something, Say Something - Only You Can Prevent Fake News Dumpster Fires." 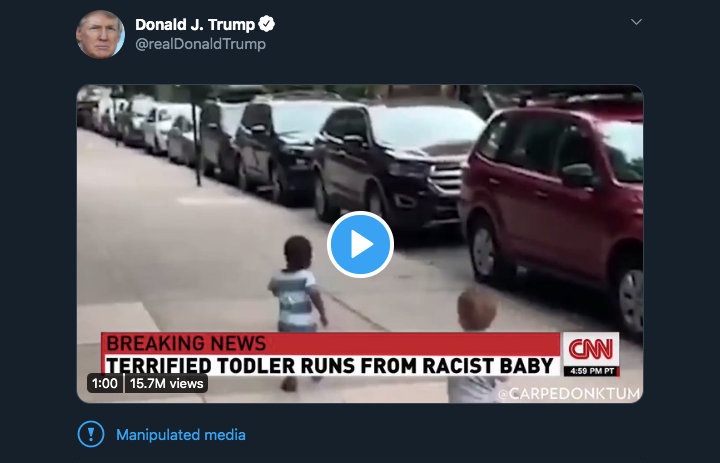 The problem is the video that Trump tweeted was not the actual video that was initially shared by CNN in 2019. The president reposted the video from a popular pro-Trump meme creator who goes by the name CarpeDonktum instead of using the original CNN video. In the original video, the boys are seen embracing each other in the end.

Upon noticing the president's repost of the video which contained misleading edit, Michael Cisneros, the father of one of the boys in the video, angrily reacted on Facebook, "HE WILL NOT TURN THIS LOVING, BEAUTIFUL VIDEO TO FURTHER HIS HATE AGENDA!! !! !! !!"

Jukin Media, a company that represents creators of videos including the parent who owns this video, said in a statement to CNN Business, "Neither the video owner nor Jukin Media gave the President permission to post the video, and after our review, we believe that his unauthorized usage of the content is a clear example of copyright infringement without valid fair use or other defense."

Jukin added that it had submitted a takedown request to Twitter. Trump also posted the video on Facebook, which spokesperson said in a statement, "We received a copyright complaint from the rights holder of this video under the Digital Millennium Copyright Act and have removed the post."

Twitter soon took action by adding a "manipulated media" warning to Trump's tweet before deleting the post altogether. Seemingly responding to this, the 74-year-old former real estate tycoon voiced his complaint as tweeting, "Why are the Democrats allowed to make fake and fraudulent ads. They should be called out."