Supporting the ongoing protests sparked by the death of George Floyd, the 'Playing with Fire' actor advises, 'Change is uncomfortable but can yield much more joy for all in the long run.'

The 43-year-old announced the contribution as protests following the death of George Floyd continue to sweep through America.

The "Trainwreck" star cited members of BTS (Bangtan Boys) in a tweet revealing the news on Monday, June 08, calling attention to the group's $1 million pledge to the movement, which was then matched by the band's fans as part of the viral #MatchedAMillion initiative.

"Very happy to join #BTSARMY in efforts to match BTS' tremendous donation #ARMYMatch1M," Cena wrote in a tweet. "One of the many reasons I respect BTS... thank you #BTS and BTSARMY." 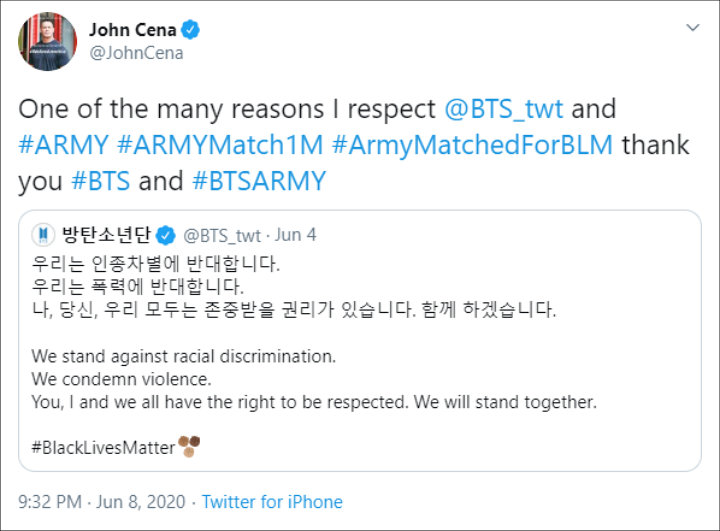 The actor raved about them.

In a separate post, Cena shared what he believes it will take to change racist attitudes in America. 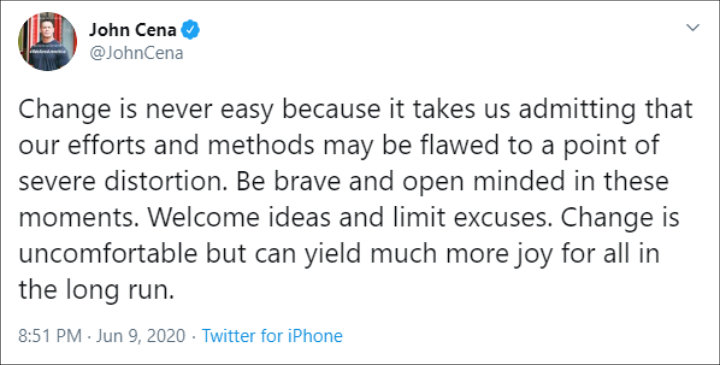 Cena called for a change to end racis.

"Change is never easy because it takes us admitting that our efforts and methods may be flawed to a point of severe distortion," he tweeted on Wednesday, June 09. "Be brave and open-minded in these moments. Welcome ideas and limit excuses. Change is uncomfortable but can yield much more joy for all in the long run."

The Body Shop Under Fire for Its Ill-Timed Diss at J.K. Rowling Over Her Transphobic Stance