The 'In da Club' rapper attempts to mock the two TV hosts for allegedly remaining silent on George's death and the Black Lives Matter movement, but it backfires.

AceShowbiz - 50 Cent is using the rising Black Lives Matter movement to reignite his feud with Oprah Winfrey and Gayle King. The rapper-turned-actor, who has in the past criticized the two TV hosts for taking down black men and for their alleged alliance with powerful white men, alleged that the former daytime talk show queen and her bestie have been noticeably silent amid the current social unrest.

He posted a photo of Oprah and Gayle which declared them as "Missing." A text over it read, "Last seen, tearing down black men, but no where to be found when it comes to murder of Greg Floyd, or any injustice directed at black men," and he added in the caption, "Just facts people." 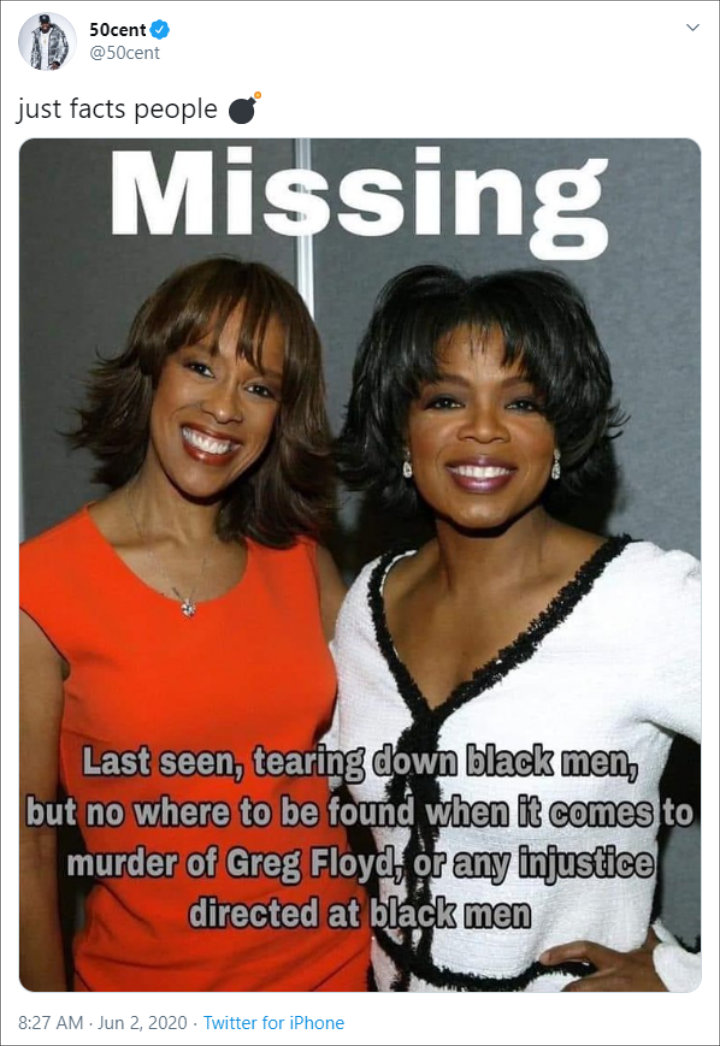 But instead of getting his point, people were distracted by his misspelling of George Floyd as "Greg Floyd." Twitter users began roasting him, with one baffled person asking, "GREG FLOYD????????" Another also pointed out his error, "Curtis.....who is Greg???"

"Well maybe it's coz no one in the name of Greg Floyd has been murdered by the police," someone quipped, while a fourth user commented on Fiddy's tweet, "Yeah but the 'fact' is that Greg Floyd didn't die George Floyd did..."

Another blasted the "Power" star/co-creator for calling out Oprah and Gayle, "He's concerned about what Oprah and Gayle are talking about but can't even remember his name. this is what happens when you're too eager to call others out before you check yourself."

Despite 50 Cent's allegation, Oprah and Gayle have actually addressed George's killing in the latest edition of her "Oprah's Your Life in Focus: A Vision Forward" which she hosted in late May. Talking about the protests that stemmed from the tragedy, the media mogul said, "There is a lot of unrest, and rightful unrest, based upon what we all saw this week. We literally witnessed-on camera-a man's life being snuffed out before our very eyes."

She continued, "It's an image that I cannot get out of my consciousness, and I just think that this is a wake up call for all of us, particularly in our country. Ralph Ellison once wrote that when people feel invisible long enough, they will lash out at the world to remind them that they exist."

"We can't tolerate hate crimes perpetrated by authorities in this country. We need to speak up and say 'That will not happen on my watch,' " she added. "We're going to do the work that it takes to dismantle in our own way...all of the constructs of injustice."

Oprah also took to her Instagram page on May 29 to speak on the death of George. She wrote along with a CGI image of the late 46-year-old, "I've been trying to process what can be said or heard in this moment. I haven't been able to get the image of the knee on his neck out of my head. It's there every morning when I rise and when I go through the ordinary duties of the day. While pouring coffee, lacing my shoes, and taking a breath, I think: He doesn't get to do this."

"And now the video from the other angle of two other officers pinning him down. My heart sinks even deeper," she went on lamenting. "His family and friends say he was a gentle giant. His death has now shown us he had a giant soul. If the largeness of a soul is determined by its sphere of influence, George Floyd is a Mighty soul."

Adding the hashtag #GeorgeFloyd, Oprah also vowed, "We speak your name. But this time we will not let your name be just a hashtag. Your spirit is lifted by the cries of all of us who call for justice in your name!"