Finding himself being labeled as anti-fascist by right-wing Twitter users, the multi-instrumentalist clarifies that he has been not been in Ohio since June 2019, and is quarantining in rural countryside.

AceShowbiz - Aaron Dessner is trying to clear his name after being dragged into a bizarre conspiracy theory. Finding himself being accused by right-wing Twitter accounts of being an Antifa organizer that instigated rioting in Columbus, Ohio, the guitarist for rock band The National turned to social media to respond to the case of misidentification.

"This morning I've woken up to the unpleasant and surprising news that I've been misindentified by some social media users as someone seen encouraging rioting in Columbus, Ohio," wrote the 44-year-old songwriter in a clarifying Instagram post posted on Sunday, May 31. "I am not the person some are suggesting I am. Nor have I been in Ohio since June 2019."

Along with a photo of a beautiful landscape, Dessner explained that he has been quarantining with his family. "I'm very fortunate and grateful to wake up every morning in the rural countryside I live in, looking at farmland and these beautiful mountains. I've been here for three months now isolating with my wife and young children," he noted.

Dessner was quickly flooded with message of support from his fans. "We have your back. This is totally absurd and ridiculous, sorry to hear you have to go through this uncomfortable situation. We totally love and admire you," one wrote, while another pointed out, "I'm honestly baffled at how anyone could think that's you - the voice sounds nothing like you at all! I'm sorry you're having to go through this. All the love." 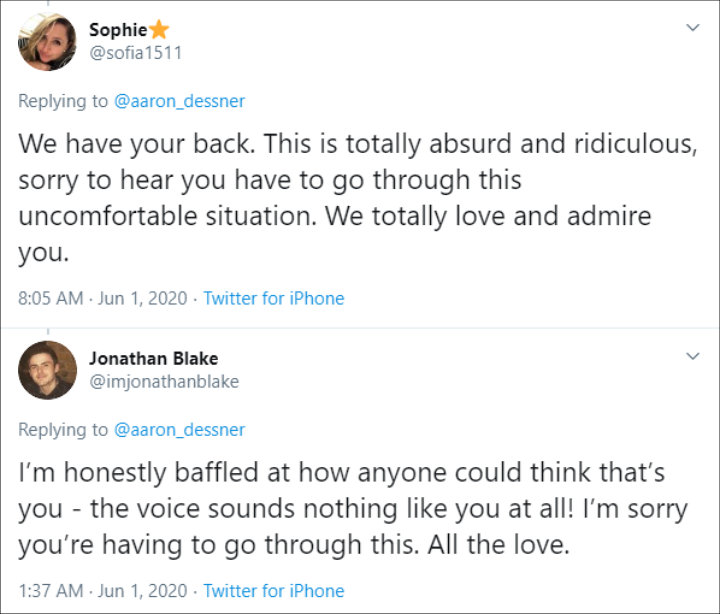 Aaron Dessner defended by fans over his case of mistaken identity.

The Antifa accusations against the Big Red Machine co-founder came from some right-wing accounts. Along with a picture of the alleged riot ringleader, one tweeted, "Meet @aaron_dessner he's an Antifa organizer paying people to riot!! He needs to be arrested NOW!!" Another shared a video capturing his lookalike "appearing to pay some kids to riot," prompting a third to say, "That's Aaron Dessner the guitarist for The National! What's he doing at the Race Riots?"

Aaron Dessner accused of being anti-fascist by right-wing Twitter users.

Civil unrest have grown across the U.S. after George Floyd was killed at the hands of a white police officer in Minneapolis, Minnesota on Monday, May 25. The video capturing the 46-year-old African-American repeatedly telling Derek Chauvin, who placed his knee on the man's neck, can't breathe outraged thousands, including many celebrities like Jay-Z, Post Malone and Camila Cabello.