The 'No Problem' rapper slams the law enforcement and Chicago Mayor Lori Lightfoot for allegedly targeting black neighborhoods in disciplining residences amid the coronavirus pandemic.

AceShowbiz - Chance The Rapper has accused Chicago police of discrimination in their attempt to discipline residences amid the coronavirus pandemic. The rapper took to Twitter on Monday, May 25 to slam the law enforcement and Chicago Mayor Lori Lightfoot for allegedly targeting black neighborhoods in upholding the social distancing rules.

"Yo I seen HUNDREDS of ppl at millennium park and and pics of even more at the parks on the north side. Outside, no masks, no social distancing, enjoying themselves," he pointed out in his tweet, complaining that the authorities didn't seem to take action against these people who broke the social distancing orders.

To highlight the alleged different treatment, Chance attached a video that saw a bunch of police officers breaking a crowd of black people gathering on the street. "Please stop sending large groups of militarized police into our neighborhoods exclusively," he added, tagging Mayor of Chicago, Lori Lightfoot. 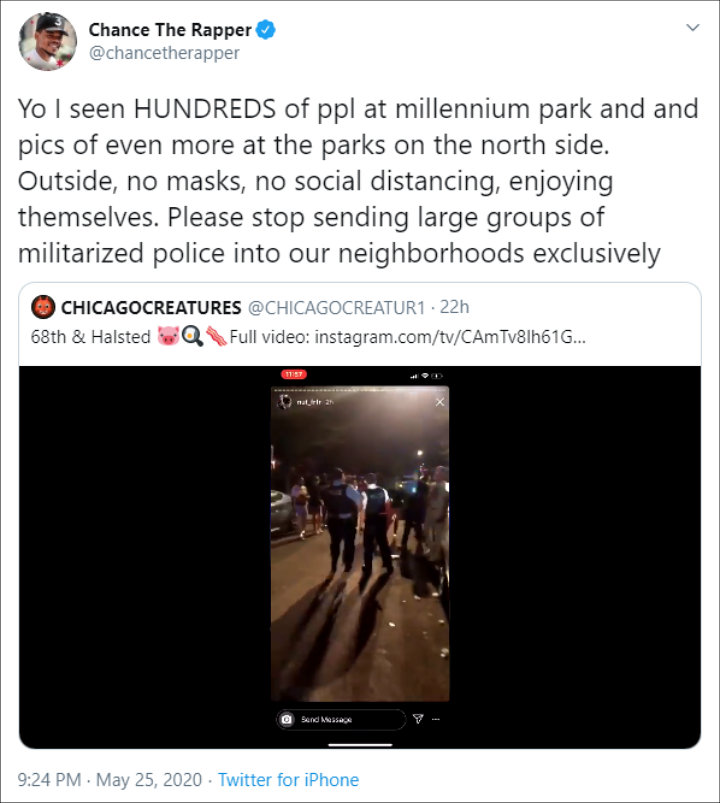 There has been growing concern among the public after all of the states loosen the social distancing guidelines. Bravo reality series NeNe Leakes was recently upset at her own son Brentt Leakes for not following the rules and ultimately risking the safety of him and his family.

"I'm upset because he had been doing good, he had been staying in since this whole thing started. The last couple days he was like I really wanna get out and go ride around," she shared on her social media page. "His dad and I were like.... okay just ride around, get in your car and come back, do social distancing, don't talk to anybody, blah, blah blah."

"The Real Housewives of Atlanta" cast member continued sharing, "And today, he asked his dad could he go out again, and then when I called him I could hear other guys in the background. So I know that he was around guys. And I'm really getting pissed off becaus it's after 8:00, he' just now headed this way, the curfew's at 9, he could have. me or Gregg sick."

Chance The Rapper Assures 'All Good' After Sharing Concerning Post

Chance the Rapper Countersues Ex-Manager, Accuses Him of Breach of Duty