Joe Keery Reacts to Twitter Hacking: It Was Deeply Upsetting to Me

One day after falling victim to the cyber crime, the 'Stranger Things' actor makes a return to his account to offer his apology for 'the horrible comments that were posted'.

AceShowbiz - "Stranger Things" actor Joe Keery has issued a heartfelt apology to fans online after his Twitter account was hacked and filled with hateful messages.

The 27 year old lost control of his social media page on Sunday, April 19, when followers were shocked to read rude posts littered with racial slurs, while one even suggested Keery had been "molested" on the set of the hit Netflix drama series, and a retweet from another account claimed the star had been "kidnapped".

Twitter bosses were soon alerted to the cyber crime and temporarily disabled Keery's account to resolve the situation, and on Monday night, the actor returned to social media to address the "deeply upsetting" situation with his 1.2 million followers.

"Hey everyone, I was hacked as I'm sure everyone knows," he posted. "What a bummer that someone would go to such great lengths to spread hate." 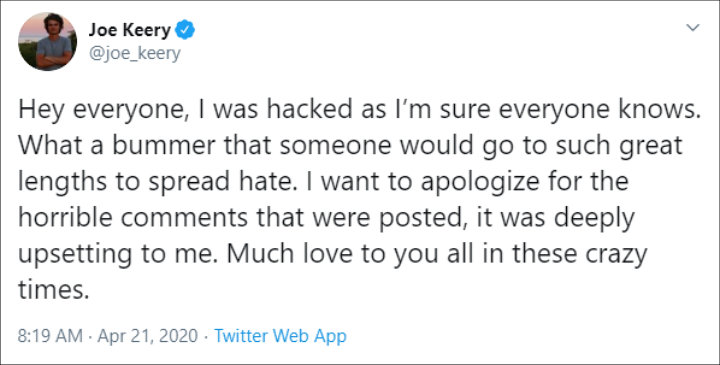 Joe Keery apologized for the hateful words that the hacker posted.

He added, "I want to apologize for the horrible comments that were posted, it was deeply upsetting to me. Much love to you all in these crazy times."