The 'Terminator' star shares his social media video just hours after L.A. Mayor Eric Garcetti issued an executive order to close bars, nightclubs and other venues to stop the spread of coronavirus.

AceShowbiz - Arnold Schwarzenegger found himself trending on social media on Sunday, March 15, after sharing an unintentionally hilarious video encouraging people to stay in amid the coronavirus pandemic.

The "Terminator" star took to Twitter to share the clip, alongside which he wrote: "Stay at home as much as possible. Listen to the experts, ignore the morons (foreheads). We will get through this together."

In the 1 minute 40 second video, Arnold could be seen wearing a "Terminator" T-shirt as he fed his pet miniature pony, called Whiskey, and donkey Lulu, carrots from the table in his kitchen.

"See the important thing is that you stay home, because there's a curfew now," he began. "No one is allowed out - especially someone who is 72 years old - you're not allowed out of the house anymore in California. So we stay at home and we eat here."

Feeding the pets their carrots, Arnold called them "yummy", before adding he'd had his "little bit of vegan food".

The video concluded with Arnold getting both animals in a head lock, before scolding one of them for attempting to bite the other, saying: "No biting, alright you've got to get along."

Following Arnold's tweet, the video was quickly shared on social media platforms, with fans appearing to be equally amused and incredulous in equal measures.

"What we all need right now is Arnie and his miniature indoor farm," one wrote, while another added: "he is aiming to terminate the coronavirus. Nice one Arnie!!" 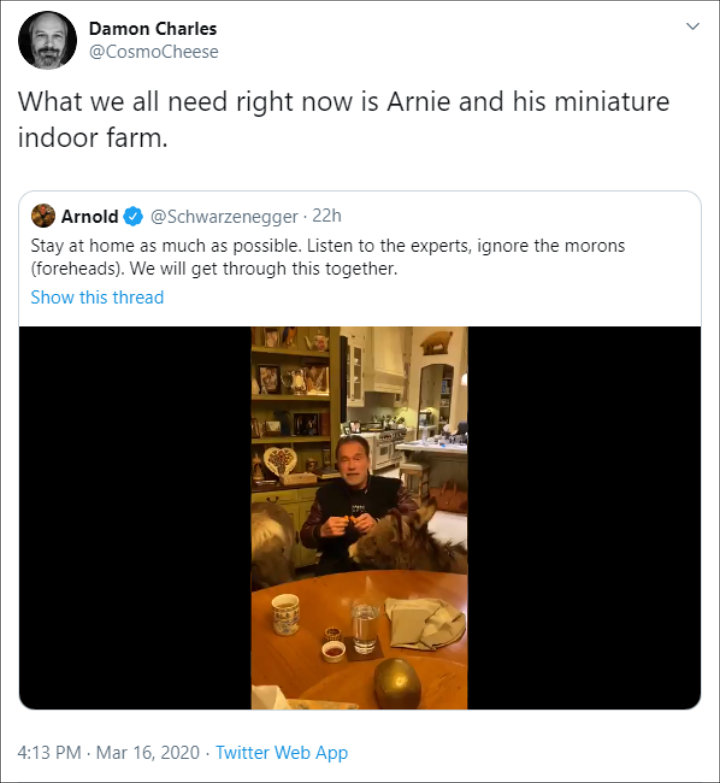 "I don't even know what's happening, but Arnie has miniature donkeys named Whiskey and Lulu, and he's wearing a terminator t-shirt while feeding them carrots? Oh, and stay inside. please," a third wrote. 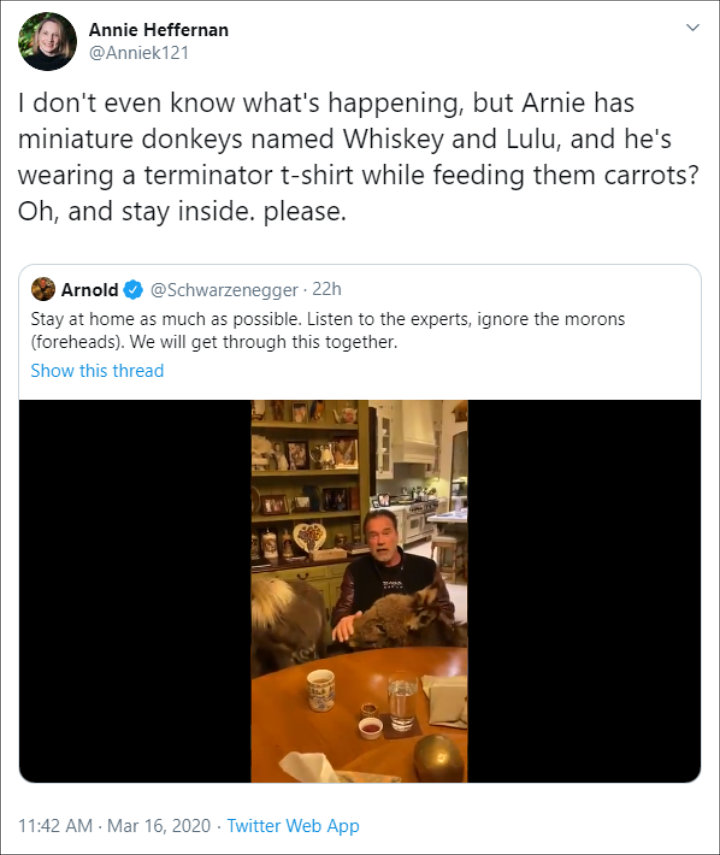 Another user gushed over Arnie's video.

Arnold's video came just hours after Los Angeles Mayor Eric Garcetti issued an executive order to close bars, nightclubs, entertainment venues and gyms in the city until at least March 31 in a bid to curb the spread of the Covid-19 virus. Restaurants will be closed to diners but will be allowed to do takeout and delivery.

Nicki Minaj's Husband Gets His Internet Use Restrictions Lifted

Arnold Schwarzenegger Brings Back His 'Predator' Character for 'Hunting Grounds'