Queen, Whitesnake and Slipknot Pull Out of Shows Over Coronavirus Concerns

Queen are working out with promoter to reschedule their May concert in Paris, while Whitesnake postpone their Japan tour and Slipknot back out of their entire upcoming Asian tour.

AceShowbiz - Queen, Whitesnake and Slipknot have postponed shows due to growing coronavirus concerns.

Queen have been forced to reschedule a May concert at the AccorHotels Arena in Paris, France, following a government decree to cancel all indoor events over 5,000 capacity until 31 May in an effort to contain the spread of COVID-19, while Whitesnake and Slipknot have pulled entire tours to protect bandmates and crew.

Queen are "currently working with the promoter to try to reschedule the date", according to a statement. "We will make a further announcement at the earliest opportunity," it reads. "Please keep hold of your tickets, which would be valid for the new date."

No other Queen + Adam Lambert shows have been affected at this time, but Whitesnake and Slipknot are not taking any chances, pulling tour dates.

A spokesman for David Coverdale's band says: "We regret to announce that Whitesnake's Japan tour which had been scheduled for March has been unavoidably postponed due to the ongoing threat of the coronavirus. We deeply apologise to all parties concerned, especially those customers who bought tickets and have been looking forward to the Whitesnake shows."

"The safety and well-being of the band's fans always comes first," a statement reads. "Furthermore in this case, the bands and artists, crew and local employees are also equally effected, and as such, this was the only responsible decision that could be made."

Whitesnake and Slipknot follow Green Day, who scrapped Asian dates earlier this week., while Sons of Apollo have axed the remainder of their European dates, claiming "governments have decided to shut down venues, restrict events, limit flight destinations, with no certainty for us and our promoting partners and that our shows can be guaranteed to happen (sic)". 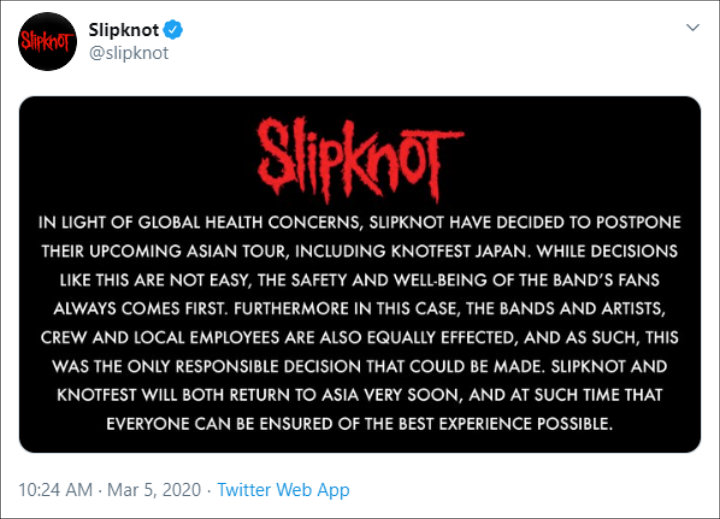 Slipknot cancelled their show due to Coronavirus outbreak.

Meanwhile, city officials in Austin, Texas have shut down next week's (begins March 09) SXSW festival due to the coronavirus spread, which to date has infected 100,000 people around the world.