James Blake slams the 'Good Morning Britain' host for sharing a screenshot of a message from Caroline Flack about how Jamil had hurt her with negative comments.

Morgan targeted Jamil after her admission that she felt suicidal after her appointment as a judge on HBO Max's upcoming vogueing competition show, Legendary, sparked criticism on social media.

The "Good Morning Britain" host tweeted a screenshot of a message he claimed to have received in October (19) from the late "Love Island" host Caroline Flack, who took her own life earlier this month, February 20, in which she explained Jamil had hurt her with negative comments about her show.

Slamming the journalist and broadcaster on Monday, February 24, Blake tweeted out a screenshot of news stories about his own comments about Flack's old show, Love Island, and called on Dorsey to ban him.

"This man is inciting hatred toward Jameela for once criticizing love island for lack of diversity (not Caroline personally)," the 31-year-old tweeted. "Here is a small selection of his criticism of his 'friend's' show. This man harasses women and marginalized people for sport. Ban him from twitter @jack."

He then retweeted a post from writer Matt Haig calling for Morgan's employers at U.K. network ITV to take action against him. 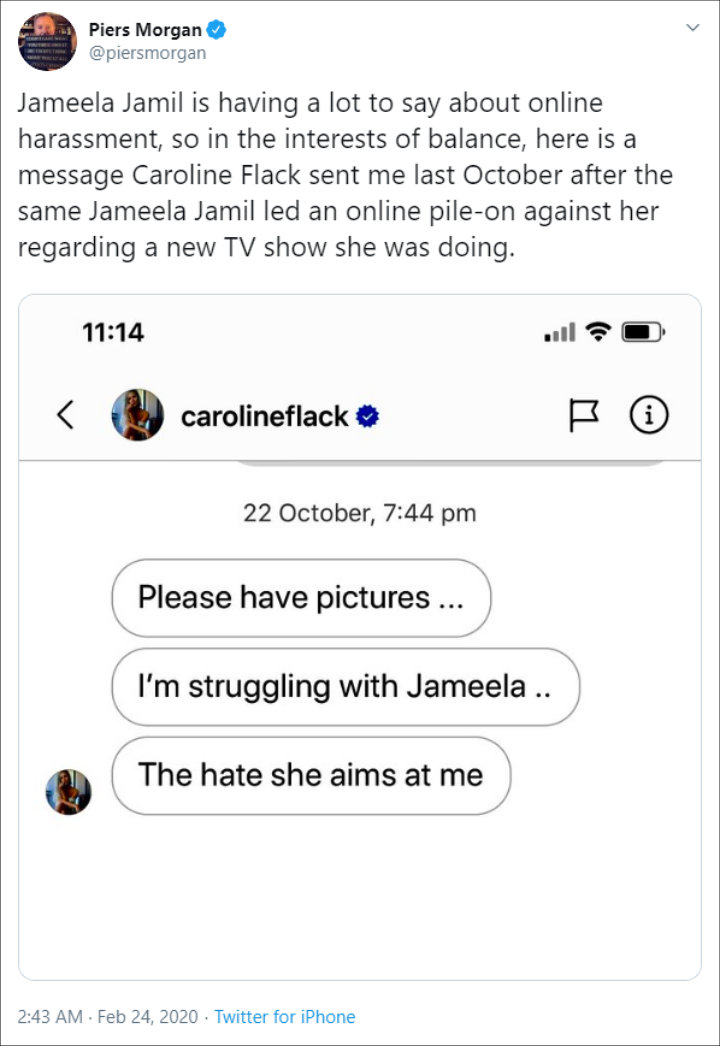 When criticising Jamil, Morgan wrote: "Jameela Jamil is having a lot to say about online harassment, so in the interests of balance, here is a message Caroline Flack sent me last October after the same Jameela Jamil led an online pile-on against her regarding a new TV show she was doing."

Jamil clapped back by calling Morgan a 'bullying parasite.'

"The Good Place" star responded by calling Morgan a "bullying parasite" and wrote that she had criticised the show rather than her "friend" Flack.