Keen to put a stop to the band's planned performance at the Safari Club International Convention, former member Brian Wilson asks fans to join him and Al Jardine in signing an opposing petition.

AceShowbiz - Brian Wilson has asked The Beach Boys fans to sign a petition to stop the band performing at a hunters' convention later this week, ends February 07.

The singer's former group, now led by Mike Love, is billed to perform at the Safari Club International Convention in Reno, Nevada on Wednesday, and Wilson is keen to put a halt to the gig, revealing he and fellow former The Beach Boys bandmate Al Jardine are "emphatically opposed to hunting."

"There's nothing we can do personally to stop the show, so please join us in signing the petition," Brian has tweeted, sharing a link to the Change.org campaign to axe the show. 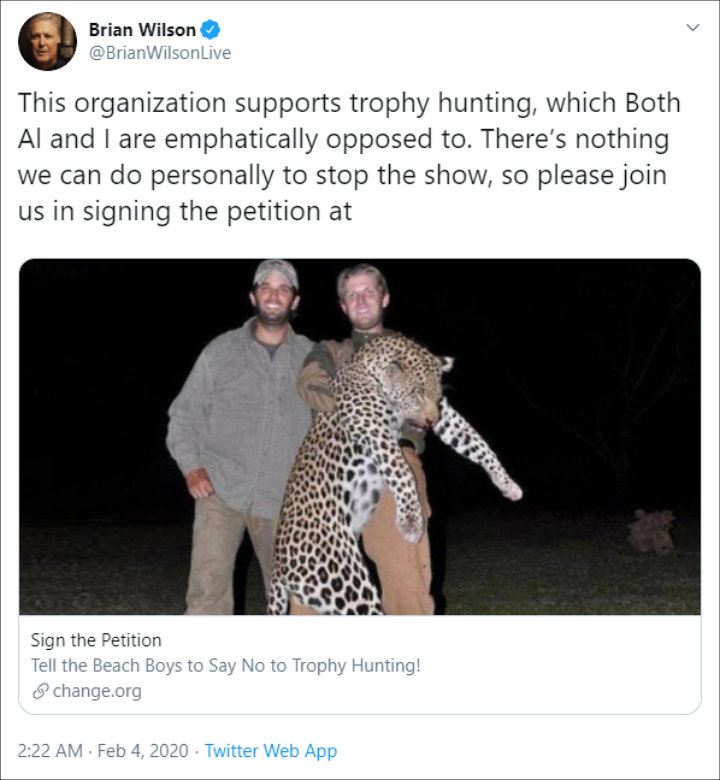 The man behind the petition has also urged The Beach Boys manager Elliott Lott to consider the costs of band boycotts if Love and his group ignore the petition and perform.

Eduardo Goncalves, who has already amassed more than 60,000 signatures - 15,000 short of his goal, also feels Love and his bandmates should "publicly state their opposition to this sick 'sport' of killing animals for 'fun'."

Miley Cyrus Gets Racy in New Photos With Cody Simpson