Fans are surprised to learn the revelation after watching viral behind-the-scenes footage of the popular 'The Late Late Show' segment as one Twitter user jokes, 'It should be called Carpull Karaoke.'

AceShowbiz - When it comes to "Carpool Karaoke", people are naturally thinking that it was the fun times when James Corden is driving car around the city with stars joining them as they are singing inside the car. However, a new video that circulated online appeared to show that James wasn't actually driving.

The said video, which was shared by a Twitter user, offered a behind-the-scenes of the popular segment of "The Late Late Show with James Corden". James was seen to be filming for an upcoming episode with Justin Bieber. However, the thing that caught fans' attention the most was that James wasn't actually driving as the car was being pulled by a truck.

"Saw James Corden and Justin Bieber filming Carpool Karaoke and this is why I have trust issues--he isn't even driving!" the Twitter user, @ZoliHonig, wrote on blue bird app. "Next thing you know they gonna tell us that his friends don't *actually* need a ride," he added.

Fans were also surprised to learn the revelation after watching the footage. "It should be called Carpull Karaoke," one user joked. "MY WHOLE LIFE HAS BEEN A LIE," another added.

However, one person insisted that he saw James driving while filming other episodes. "Y'all when I saw One Direction filming Carpool Karaoke James was actually driving," the person tweeted.

James himself just laughed it off the speculations. Taking it to the official Twitter account of the late night account, the British host joked, "guys, we don't even use a real car," alongside a photo of him and Samuel L. Jackson filming CGI scene while holding a car steering wheel control. 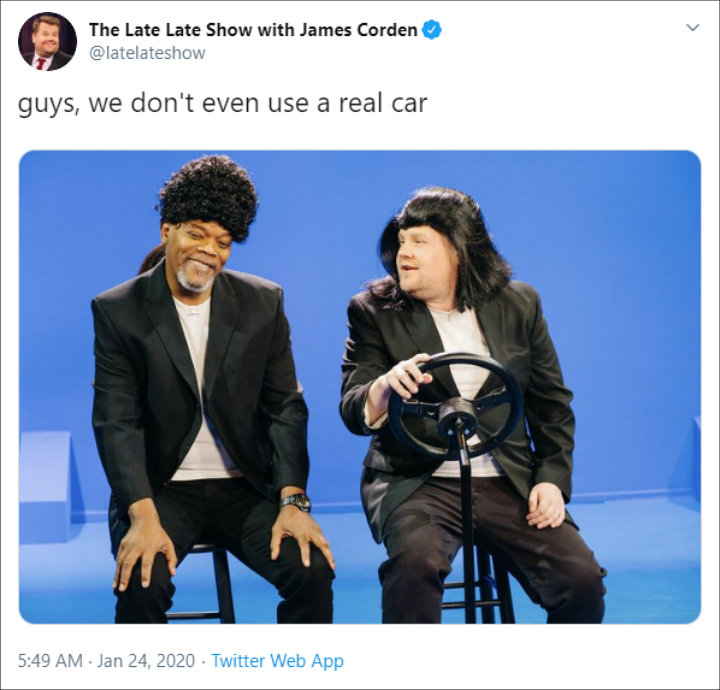 James Corden laughed off speculations that he didn't drive on 'Carpool Karaoke'.

The show then set the records straight in a statement. "James always drives during 'Carpool Karaoke," the statement read. "However, on the rare occasion when there is a stunt component and the producers feel it is unsafe to drive, we will use a rig (tow)."