The 'Keeping Up with the Kardashians' star insists that she attended Cleveland Cavaliers vs. L.A. Lakers game to support the Canadian athlete, and not the other way around.

AceShowbiz - Kim Kardashian attended Cleveland Cavaliers' game against L.A. Lakers to show support for Tristan Thompson, and not the other way around. The makeup mogul has shut down reports that she was caught on camera heckling the Canadian athlete at the game held at the Staples Center on Monday night, January 13.

Responding to a tweet about the moment, Kim insisted, "I was there to support him! And was cheering screaming LETS GO TRISTAN!!!!! I would never go boo anyone. I don't go hate, only to cheer!" But people were disappointed that the "Keeping Up with the Kardashians" star didn't actually boo Tristan, considering his messy split from Khloe Kardashian. 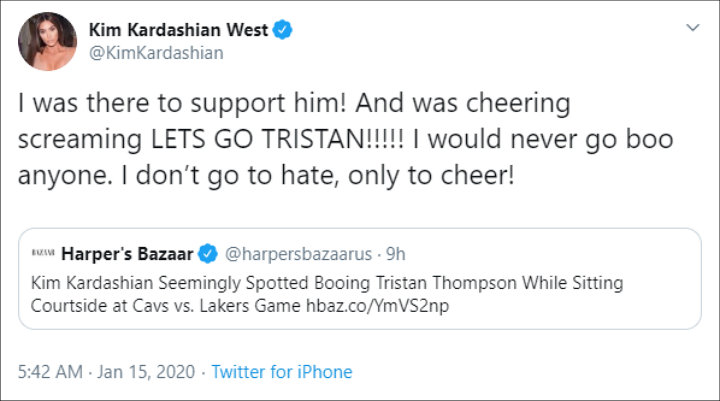 Many told Kim that Tristan "deserves a few boos" over his past actions, as one said, "This is more disappointing than if you were booing him." Another admitted, "Bugger. I was loving the thought of you booing him. Would be savage AF. Haha." Meanwhile, someone wrote, "Damn Kardashian stay letting themselves get dragged around by men who repeatedly mistreat and publically disrespect them."

Some others, meanwhile, blasted her for not giving Jordyn Woods the same treatment as Tristan. "Drag Jordyn yet support Tristan," someone sarcastically commented. "The fact that they welcomed Tristan back multiple times but [Jordyn] is totally cut off," one other similarly said.

Kim was joined by husband Kanye West when she was spotted sitting courtside next to Courteney Cox during the game. Staying warm in a puffy black coat over snakeskin pants and sparkly boots, the mother of four also took to Instagram Stories to share some pictures taken during the game. One of the photos featured Tristan.

Tristan's relationship with the Kardashians has seemingly continued to get better following the drama. Last month, he was even invited to the famous clan's annual Christmas Eve party and spent time hanging out with Khloe and their daughter True Thompson.

Sharon Osbourne Clashes With Marie Osmond Over No Shapewear Claims