Austin Joyner was kicked off stage by the Compton-bred rapper for refusing to say 'f**k Donald Trump' at the Mala Luna Music Festival in San Antonio, Texas back in October 2019.

AceShowbiz - The guy who was humiliated on stage at the Mala Luna Music Festival in San Antonio, Texas back in October 2019 has addressed the incident. Austin Joyner, who was kicked off for refusing to say "f**k Donald Trump," took to his Twitter account over the weekend to give his side of the story, in addition to attaching a letter for the Compton-bred rapper.

In the January 10 post, 18-year-old accused YG of targetting him while praising the security guards who helped him. He also revealed that he was there for some of the other acts. "I didn't want to present myself in that way. At no time did I mention anything regarding politics at the festival," so he wrote in his account.

"As Americans, we have Freedom of Speech, and while I may not agree with YG's hatred towards President Trump, as a citizen, he's allowed to say what he want," he continued. "However, he crossed a line when he singled me out for not singing along and tried to humiliate me and get the entire crowd to turn against me in a threatening manner."

Blasting the rapper, Joyner said, "You put a target on my back that night and made it unsafe for me at the festival. Thankfully, two security guards came up to me after you kicked me off stage. They advised me to leave because they determined it was too risky for me to stay there at that point."

"It has taken me a few months for me to fully forgive you, but I did not want to respond to the incident until I did forgive," he added. "I forgave you on January 4, 2020. I really don't want to hold on to those type of feelings."

"I believe that you could even make the type of transition Kanye West has made," he concluded the letter he wrote for YG. "In the end, I want you to succeed, and I want you to become the man God designed you to be." 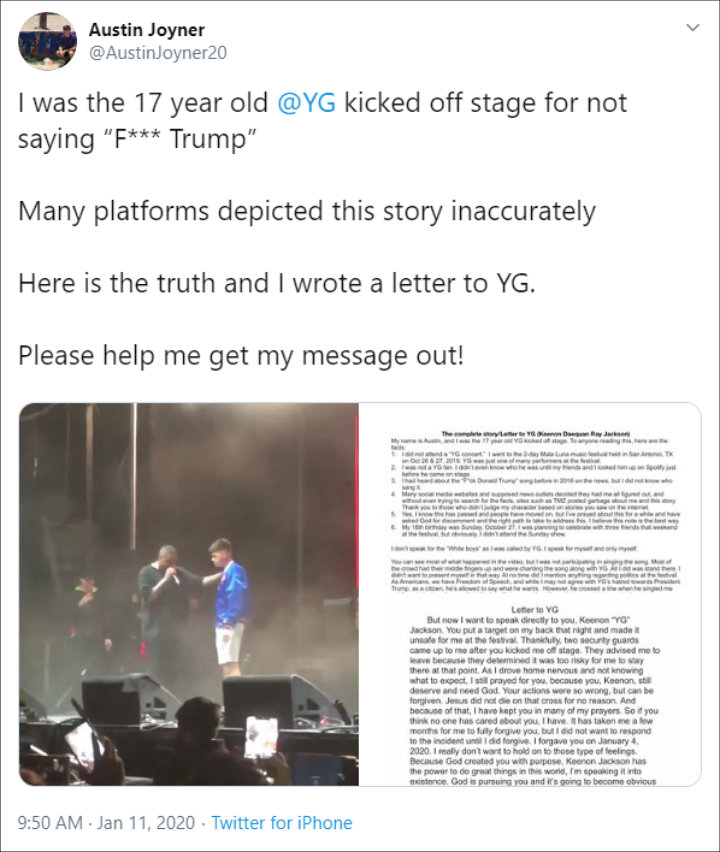 The guy who was kicked off stage by YG shared his side of story.

In the video which circulated online of the incident, the rapper invited a fan on stage to yell out "F**k Donald Trump." He said to the fan, "I don't know if I want to shake your hand yet, Listen, I spotted you out in the crowd. I asked you if you f**k with Donald Trump. You said you don't know. So, since you don't know, I need you to make up your mind tonight… Because I know your mama, your daddy, your grandmama, your grandfather is watching, I want you to state your name and go 'F**k Donald Trump.' "

YG Released From Prison Ahead of Grammys Performance

YG 'Has No Idea' Why He's Arrested, The Game Calls Out LAPD