The former 'Lopez Tonight' host comes under fire after commenting, 'We'll do it for half,' on a report that Iran has placed a $80M bounty on President Donald Trump's head.

AceShowbiz - George Lopez has landed in hot water for his comment about an alleged bounty placed on President Donald Trump's head. The comedian has been catching backlash after joking that he would kill POTUS for Iran, after the country allegedly planned to retaliate following the U.S. airstrike in Baghdad that killed Irania General Qassem Soleimani.

An Instagram account posted the unverified claim with the headline "Iran 'offers $80million bounty for Donald Trump's head' after death of general." The 58-year-old actor then jumped into the comment section, writing, "We'll do it for half." 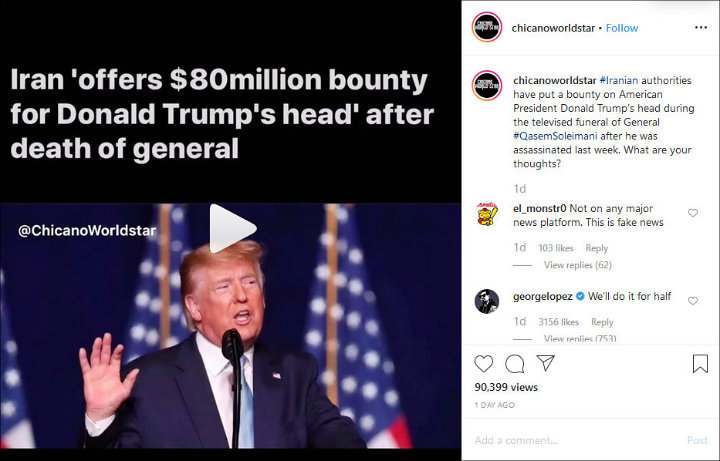 Following his controversial remark, both the star's name and #ArrestGeorgeLopez were reportedly trending on Twitter Monday morning, January 6 as right-wing pundits tweeted their outrage over the comment. Some social media users thought that Lopez's comment about the president crossed the line and that law enforcement or Secret Service should look into him.

"you should go to prison for that comment," one said to the former "Lopez Tonight" host. Another warned him, "you cant hide behind comedy on this one." Someone else compared his statement to "Terrorist act" as writing. "did u just offer a Bounty for the killing of our President? I hope u are investigated. Terrorist act."

Some others, however, called out Trump's supporters for their double standard as the leader and his team have been known for making threatening comments about his political rivals. "You know how they are, hypocrisy on steroids. Get ready for the heat George. Only Trump our Supreme Leader can talk like that," one of the users defended Lopez.

Lopez has not directly addressed the controversy surrounding his remark about Trump, but his representatives have played down his comment, telling Fox News that it was "a joke."

Reports about the supposed $80 million bounty on Trump went viral after an eulogist was heard saying during funeral procession of General Soleimani, "On behalf of all of Iran's people - 80 million Iranians - and each puts aside US$1, it would equal $80million." The man added, "And we would give this $80 million, on our own behalf, as a gift to anyone who brings the head of the person who ordered the murder of the grand figure of our revolution. Anyone who brings us the head of this yellow-haired lunatic, we would give him $80million on behalf of the great Iranian nation. Chant if you agree."

It is yet to be known that the call for a bounty on Trump has been authorized by, or represent the official position of, Iranian authorities.

Video: Influencer Tee Tries to Flirt With Jason Derulo, He Backs Away