James Corden Up for Season 4 of 'Gavin and Stacey', Co-Star Claims

During an appearance on 'Good Morning Britain', Oscar Hartland spills that he has asked the series creator about the possibility when they filmed a special Christmas episode.

AceShowbiz - James Corden is prepared to bring back his hit comedy "Gavin and Stacey" for one more series, according to one of its stars.

The show returned to British screens for the first time in almost a decade on Christmas Day (December 25), with a special episode that was the most-watched festive TV show since 2008, with 11.6 million viewers.

Oscar Hartland, who plays 'Neil the baby', the son of Corden and co-creator Ruth Jones' characters Smithy and Nessa, in the show told U.K. breakfast show "Good Morning Britain" Corden had informed him a fourth full season would happen if it's "what the people want."

Hartland revealed: "I did ask James in the process of filming. He said it's just what the people want. Me, I would love it to happen. It really depends what other people think about it and whether they like it or not."

The Christmas special left fans begging for more episodes as it ended with a romantic cliffhanger after Nessa confessed her love to Smithy and asked him to marry her.

"Gavin and Stacey"'s comeback was a surprise to many, as Corden is now based in the U.S., where he has enjoyed success as a late night host, and landed film roles, including in the new "Cats" movie.

Its return was not without controversy, however, as one scene, in which characters sung along to the word "f**got" in the Christmas track "Fairytale of New York", provoked complaints from some viewers due to the presence of the gay slur.

Madonna Enjoys 'Water Therapy' With Family in the Maldives 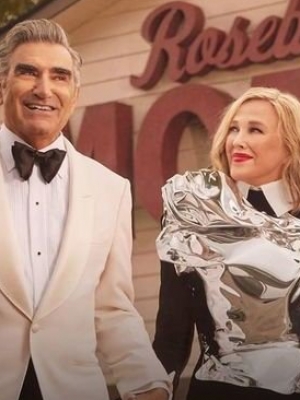