Trey Songz Hits on Flight Attendant, Is Caught Following Her on Instagram

Taking to her Twitter account, the flight attendant detailed their interaction during a flight and revealed that the 'Na Na' singer even gave her a $200 tip after that.

AceShowbiz - It looks like Trey Songz is actively searching for a new girlfriend. A Twitter user has recently gone viral on the micro-blogging site after she revealed that she met the R&B singer during a flight and even got the chance to flirt with him.

The said user, who claimed to be a flight attendant, was extremely delighted to be able to meet Trey during the flight, sharing several photos of them together. "Finally got my first celebrity passenger after 2 years of flying and I'm so glad it was TRIGGAAAAA," she said in her post. "Ima flex tf outta this forever. And he really is a sweet and laid back guy." 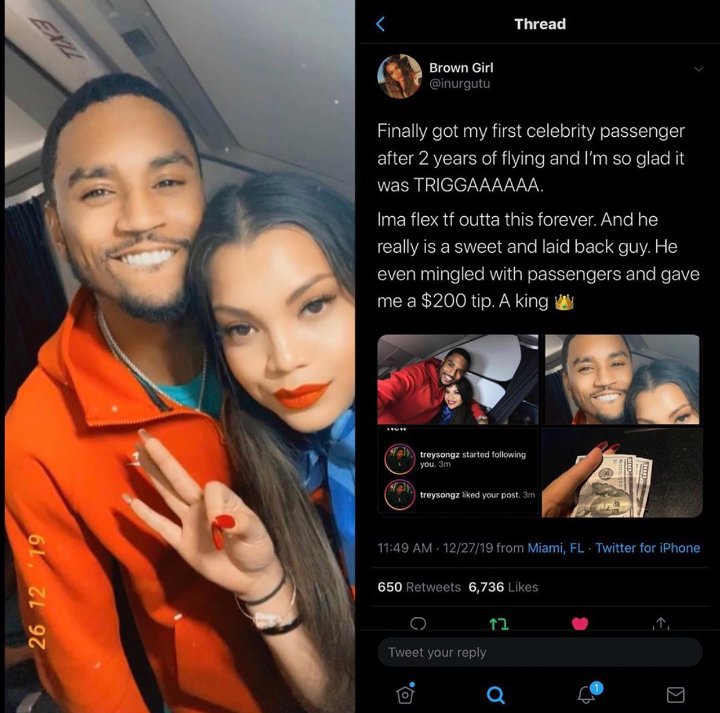 Revealing that Trey gave her a $200 tip, she went on detailing their interaction in a series of separate posts. She recalled, "When Trey Songz came aboard I said 'EYUHHH' he was so shook. He said 'I been flying 20 years and not once has anyone done that to me,' " adding, "I told Trey to whoop w me and he started throwing up the Cs. Got dammit boy u was almost perfect. Hahahaha jk."

It looks like Trey took a liking on her because he then started following her on Instagram and even hit the like button on one of her posts on the photo-sharing platform.

It's unclear whether or not the two are still contacting each other. Meanwhile, Trey has yet to respond to this story.

Trey was previously rumored to be dating the likes of Lori Harvey and Megan Thee Stallion. However, the Hot Girl Summer has since debunked the rumors and urged people to stop making false rumors about her dating life just because she ended her relationship with MoneyBagg Yo. "Moving on is not 'belonging to the streets,' " she said at the time. "Y'all men and judgmental women gotta grow up lol."