The 'Juice' raptress indicates that she's ready to take over Toyota Center with her body positivity after the team invites her to join the Clutch City Dancers on the court.

AceShowbiz - The Houston Rockets' fans are better be ready for Lizzo's twerking storm. The rapper has been invited to attend an upcoming game at the team's home arena Toyota Center amid controversy surrounding her revealing outfit at Los Angeles Lakers vs. Minnesota Timberwolves game over the weekend.

On Wednesday, December 11, Houston Rockets sent an invite to the 31-year-old star through its official Twitter account. "@Lizzo, we like your moves! You have an open invite to come home to Houston and dance with @OfficialCCD on the court any time!" read the tweet.

Noticing this, the "Truth Hurts" hitmaker replied in no time with an affirmative answer. "I'll be there w/ bells on my booty," she wrote, likely referencing to her butt-baring outfit at the Sunday, December 8 game. 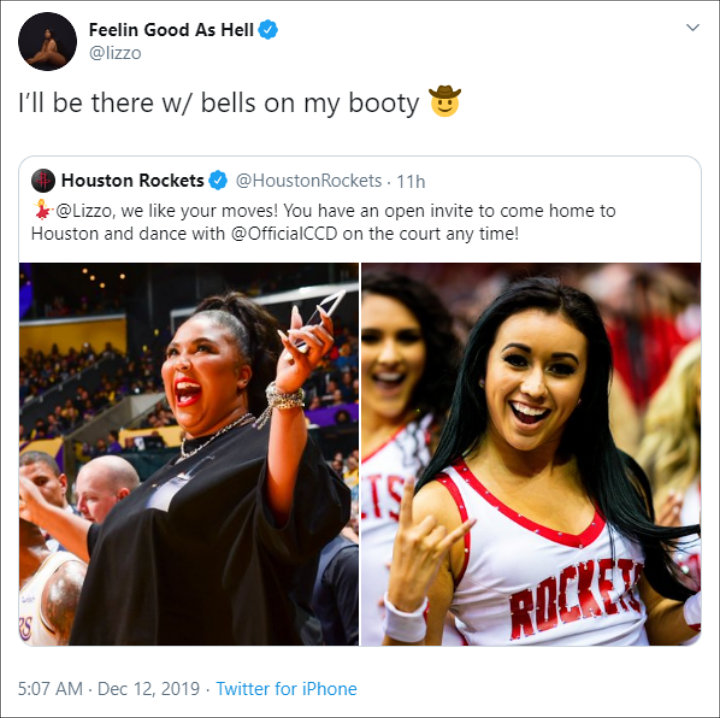 Lizzo responds to Houston Rockets' invite amid her twerking controversy.

It's apparently only a matter of time before Lizzo takes her body positivity to the Rockets' home, as the team responded to the artist, who has been named TIME magazine's Entertainer of the Year for 2019, "Let us know when."

Lizzo made headlines after she showed up at Staples Center in a black T-shirt with a giant cut-out on the backside, showing her black thongs which barely covered her butt. When the Laker Girls performed to her hit song, the raptress joined in on the fun and twerked along to the track.

Her revealing attire has sparked complaint and concerns from basketball fans, with some going as far as calling for a ban on Lizzo from the Staples Center. Though her fate is currently unknown, sources from the arena told Baller Alert that all questions and concerns have been transferred to the managers on duty for that day. Those supervisors have allegedly conducted a meeting, though it's currently unknown if a requested ban on the rapper was being discussed at the meeting.

Meanwhile, Lizzo responded to the backlash on Instagram Live on Monday. Remaining unfazed by the criticism, she said, "It doesn't matter what goes on on the internet, nothing really breaks my joy. I'm a really solid grounded person." She added, "This is who I've always been, now everyone's looking at it, and your criticism can remain your criticism. Your criticism has no effect on me, negative criticism has no stake in my life, no control over my life, over my emotions. I'm the happiest I've ever been, I'm surrounded by love, and also want to spread that love, and spread these cheeks."

Realizing that she's "shocking because you've never seen in a long time a body like mine doing whatever it wants to do, and dressing the way that it dresses, and moving the way that it moves," the 31-year-old star declared, "I'm not going to shrink myself because somebody thinks that I'm not sexy to them."

Ray J Spotted With Mystery Woman Amid Princess Love Marriage Drama - Is She His Side Chick?

Lizzo Freaks Out After Beyonce Wishes Her Happy Birthday

Lizzo Shocks Diddy With Racy Twerking on His Instagram Live