The 'Keeping Up with the Kardashians' star quotes a tweet about Cait's son Brandon Jenner clarifing why there wasn't any family waiting for Cait at the end of the bridge after her elimination.

AceShowbiz - Caitlyn Jenner was among the contestants on the U.K. version of "I'm a Celebrity.. Get Me Out of Here!" until she was eliminated this past weekend. Her getting voted off was unfortunate enough, but the fact that no one from her family welcomed her at the end of the bridge made it even more worse. Now, Kim Kardashian has taken to Twitter to address the snub allegations.

The "Keeping Up with the Kardashians" star quoted a tweet about Cait's son Brandon Jenner clarifing why there wasn't any family waiting for Cait after her elimination. "Exactly what Brandon said!!!!" Kim wrote. "NO ONE from I'm A Celeb even reached out and asked for letters, appearances or anything from any Kardashians or Jenners." 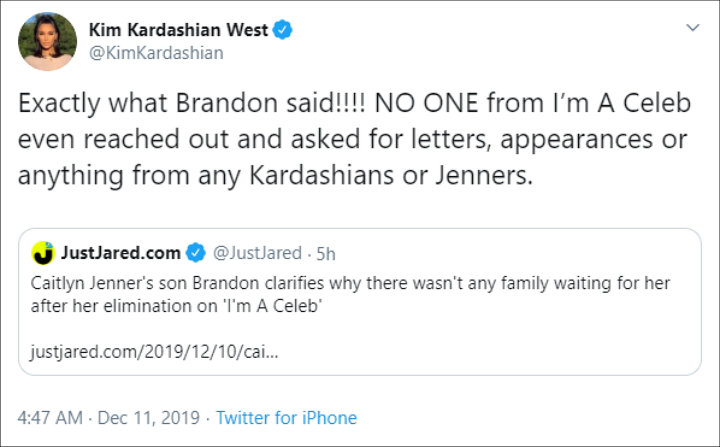 Kim Kardashian claimed no one from 'I'm a Celebrity' contacted her.

In a DM screenshot posted by Mirror Online, Brandon said, "Honestly, nobody reached out to set it up! I think it might have been a "storyline" the producers wanted to fabricate in order to get more empathy for Caitlyn," adding, "That's how that kind of TV works."

However, fans didn't buy their words. "Right. So they ask all the other contestants families except one, really??" one user tweeted. One other said, "Oh come on! you expect us to believe this? They would ask everyone's family on the show except hers."

Someone else joked that the show was "probably scared of how much you'd all ask for the appearances." Another user added, "No offence or anything but if you actually cared about someone in the jungle that is your family then you wouldn't wait for a company to reach out to you to go and see them you would just make the effort and go and meet them! #justsaying."

After being eliminated from the show, Caitlyn reflected on her stint and shared that she was proud of herself for staying in the jungle longer than she did back in 2003. "I came here to kind of test myself, because I did the show 16 years ago. I knew it wasn't going to be easy. The first night I didn’t think I'd make it to the next night. I can't believe I made it all the way to three weeks."

A source claimed that KarJenners had prepared something for Cait and "had no intention of throwing any shade at Caitlyn by not creating a care package." The insider continued, "They've been talking about throwing Caitlyn a welcome home celebration for her to congratulate her on making it through all the tough challenges and sticking with it to the end. Kylie and Kendall and incredibly proud of their dad and they know that Caitlyn knows how much they love her."

'I'm a Celebrity': Fans Are in Tears as No One Greets Caitlyn Jenner After She's Eliminated