Saweetie 'Tired' of Being Racially Profiled by Store Employees

However, according to the 'My Type' rapper, the store employees' attitude changes drastically when she is about to pay her items, and that just makes her be further sick of them.

AceShowbiz - Being racially profiled apparently has pretty much become a part of Saweetie's everyday life to the point where she can't take it anymore. On Sunday, December 8, the female emcee took to Twitter to express her frustration as she is often subjected to racial profiling whenever she wants to buy something.

In one tweet, Saweetie admitted she's "tired of these clerks reminding me what the price is when I dress crazy." However, according to her, their attitude drastically changes when she's about to pay her items, and that really bothers her. "Then wanna compliment my nails when it's time for me to swipe," she said, before adding, "Then wanna ask me what I do when they see my wrist. Foh." 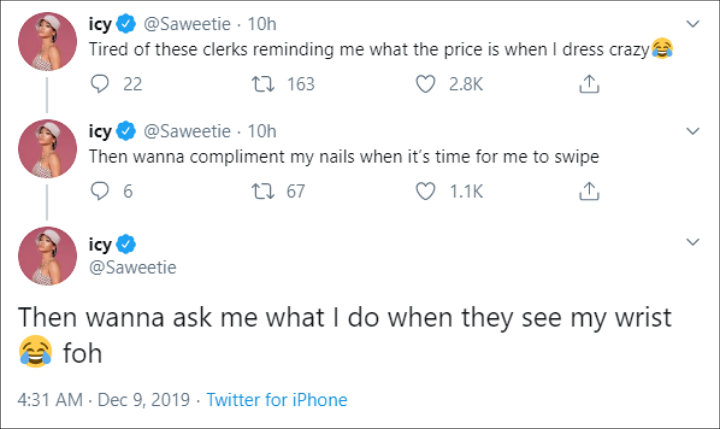 Saweetie is tired of being racially profiled.

Her followers have since comforted her, with many telling her to stop going into the stores if the staff often racially profile her. "They don't deserve your business," one wrote, as someone else similarly said, "Take ur service else where, they don't want you." Meanwhile, one other dubbed the clerks a "clown," adding, "They'll learn soon enough."

Saweetie is hardly the first celebrity to be racially profiled at stores. Earlier this year, SZA alleged that she had security guards called on her to ensure that she wasn't stealing at a Sephora branch in California. However, instead of losing her temper over the incident, the singer chose to wish the employee well, "We had a long talk. U have a blessed day Sandy. Can a b***h cop (buy) her fenty in peace er whut."

Following the revelation, Sephora announced that it would close all its stores, distribution centers and corporate offices in the U.S. for one day to conduct diversity training for employees. "We are gathering more information about the incident in order to take the proper next steps," a spokeswoman for Sephora said at the time. "We take complaints like this very seriously, profiling on the basis of race is not tolerated at Sephora."

Saweetie 'Tired' of Being Racially Profiled by Store Employees

Saweetie Trolled for Her Performance at Cheetos Fashion Show: 'The Crowd Is Dead'