Both bands have taken to their social media accounts to apologize for having to pull the plug at their Knotfest Meets Forcefest performances, expressing concerns for their fans' safety.

AceShowbiz - Rockers Slipknot and Evanescence had to pull the plug on their sets at Mexico's Knotfest Meets Forcefest event on Saturday, November 30 due to a broken stage barricade.

Reports suggest the gate broke during an evening set by Behemoth, and officials at the Mexico City venue were unable to repair the damage.

As a result of the security issue, the festival's headlining performances had to be scrapped, and fans were not amused, with some even storming the stage area and trashing equipment that had been set up for Evanescence. 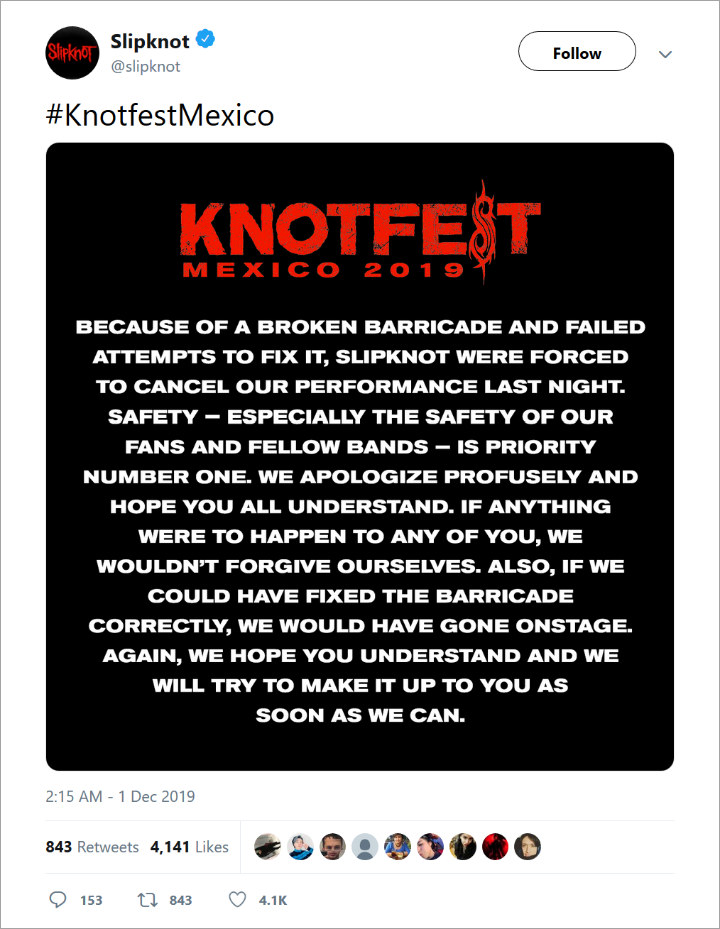 "Mexico City, we are so, so disappointed that we didn't get our chance to play for you tonight at Knotfest," she said in a video message. "The last couple of bands didn't get to play because of a safety issue with the barricades and it wasn't something that could be fixed."

Members of masked band Slipknot also addressed the change of plans in a statement issued early on Sunday, sharing, "Because of a broken barricade and failed attempts to fix it, SLIPKNOT were forced to cancel our performance last night."

"Safety - especially the safety of our fans and fellow bands - is priority number one. We apologize profusely and hope you all understand. If anything were to happen to any of you, we wouldn't forgive ourselves. Also, if we could have fixed the barricade correctly, we would have gone on stage. Again, we hope you all understand and we will try to make it up to you as soon as we can."

Tim McGraw Talks Being on the Road With Faith Hill: Our Roles Reverse A Little Bit