NBA player Dwyane Wade responds to the 'post-thanksgiving hate' received online by his family over their latest family picture which features his 11-year-old openly-gay son.

AceShowbiz - Gabrielle Union and husband Dwyane Wade were targeted by homophobes on the internet following their Thanksgiving family picture that showed his 11-year-old son Zion wearing a crop top and showing off his painted nails. While many people applauded the parents for supporting the young boy, some sneered at them.

"So sad these boys turning into girls," one wrote. Another commented, "Ya got this lil black man with tips on smh ya need to do better." A third commenter exclaimed, "Y'all really saying this is cool? Like for real????????? Wtf not my Son ain't no way!!!!" More criticisms: "This Is not cool," "Horrible parents," and "This is an abomination."

The NBA player took to Twitter to address the controversy. "I've seen some post-thanksgiving hate on social about my family photo," he wrote. "Stupidity is apart of this world we live in - so i get it. But here's the thing – I've been chosen to lead my family not y'all. So we will continue to be us and support each other with pride, love & a smile!" 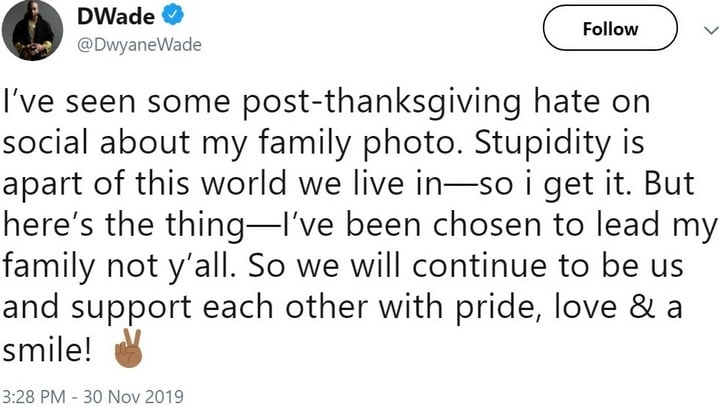 In another comment, the Miami Heat star explained to his online followers, "As a parent my only goal is that my kids feel that i see them, love them and support them."

While Gabby kept quiet on the criticisms over Zion's appearance, the former "America's Got Talent" judge has always been very protective of her family. A couple weeks ago, she hit back at someone who seemingly took a dig at her and Dwyane as the parents of 17-year-old Zaire who followed in the footsteps of his dad as a basketball player.

The actress called her stepson Zaire "a great student" who's "active in his community" following the subtle diss. When an individual claimed she took the comment the wrong way, she reacted, "When he says 'I hope he's surrounded by people smarter than you...' He knows damn well who his parents are & STILL wonders aloud if we value education. My reading comprehension is solid sis."