Demi Lovato even can't help but gush over Malia and Sasha Obama after their mother and former first lady, Michelle, takes to her Instagram account to share the photo.

AceShowbiz - It's been a while since people are treated to Barack and Michelle Obama's family photo. Thus, in celebration of Thanksgiving, the former FLOTUS took to Instagram on Wednesday, November 27 to share a new image of their family, and people couldn't help but gushing over how grown-up the couple's daughters, Malia and Sasha, look now.

Both Malia and Sasha looked totally stunning as they snuggled up close to their politician dad in the sun-kissed photo. The former first daughter, who is now 21 years old, was dazzling in a classic black dress while her younger sister opted for a sweet look in a lavender frock. Meanwhile, Michelle stunned as usual in a white empire dress with sewn-on denim patches. Lastly, Barack went casual in a plaid shirt and matching pants.

"From our family to yours. #HappyThanksgiving," Michelle wrote in the caption.

Considering that Malia and Sasha were only 10 and 7 respectively when they first entered the White House, people were gushing over how much they had grown up ever since then. "Wow, when did this happen! They grew up! Well happy Thanksgiving! Just beautiful," one commented, as another admitted s/he "wasn't ready for Sasha to slay souls like this." Demi Lovato even couldn't help but rave, "The girls are so grown and beautiful!!"

"It's crazy how big the girls are. They were so young when you entered the White House. Happy Thanksgiving We miss you so much!" one other person commented. Another similarly gushed, "Oh my gosh!!! Those kiddos all grown up!! Such lovely young ladies." 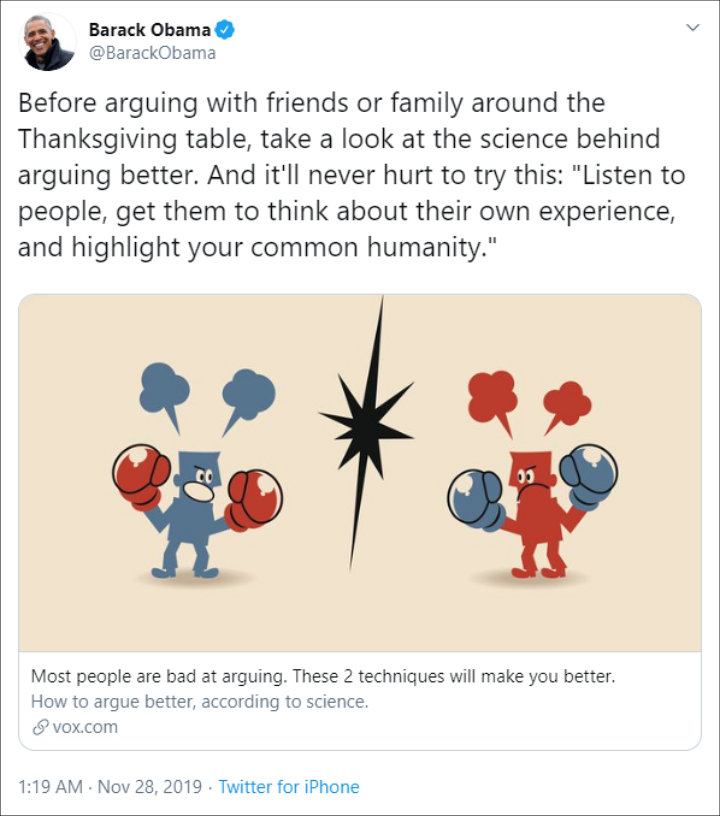 Barack Obama shared a message ahead of Thanksgiving.

While Michelle blessed people with a new family photo for Thanksgiving, Barack took to his Twitter account to share a message ahead of the celebration. "Before arguing with friends or family around the Thanksgiving table, take a look at the science behind arguing better," he said. "And it'll never hurt to try this: 'Listen to people, get them to think about their own experience, and highlight your common humanity.' "