AceShowbiz - Dan Levy has called out bosses at Delta Airlines for censoring gay love scenes from showings of "Rocketman" - despite previously promising to rectify the situation.

Taking to Twitter on Monday, November 25, however, "Schitt's Creek" star Dan insisted the company was still showing censored versions of the flick during flights, as he hit out at the airline.

"On a flight and noticed @Delta cut the gay love scenes out of @rocketmanmovie," he penned. "Censoring LGBTQ love stories/intimacy is highly problematic and super disappointing."

Delta first came under fire in late October when one customer complained that a lesbian love scene - which contained no nudity - and kissing scenes between two of the female characters in "Booksmart" had been omitted. Dialogue had also been removed, along with the words "vagina" and "genitals" which had been muted throughout the film. 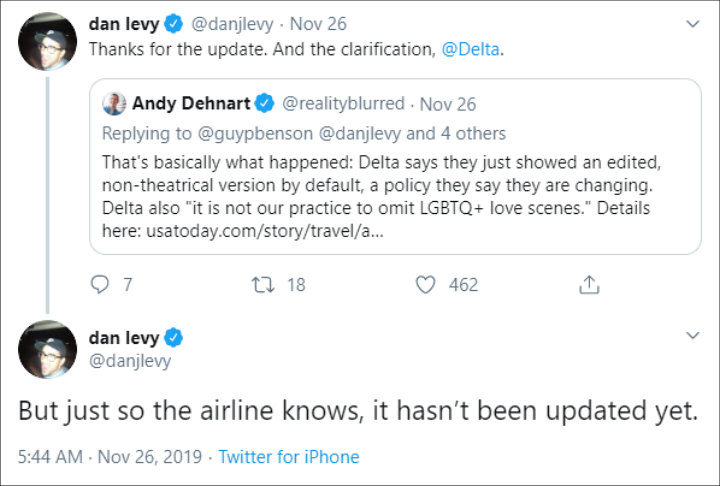 "We selected the edited version and now realise content well within our guidelines was unnecessarily excluded from both films. We are working to make sure this doesn't happen again."

They have yet to respond to Dan's comments.

Elton John's 'Rocketman' Gets Banned in Samoa for Homosexuality Content

Bryce Dallas Howard Googled How to Act Old for 'Rocketman'