The 'Don't Be Tardy...' star fuels the speculation that she's pregnant with her seventh child after she flashes a rounder belly when pictured at a recent event.

AceShowbiz - Kim Zolciak-Biermann has added fuel to speculation that she's pregnant again at 41 years old. The Bravo reality TV star has shown what appeared to be a growing baby bump when she's spotted at a recent event. In the pictures which surfaced online on Monday, November 25, her rounder belly was protruding under her tight black dress.

According to MTO News, "The Real Housewives of Atlanta" alum recently got pregnant with her seventh child after her husband Kroy Biermann, who had a vasectomy back in 2014, underwent a procedure to reverse it. A Bravo insider allegedly tells the site, "It's the storyline on the new season of 'Don't be Tardy...'. Kroy gets his vasectomy reversed, and Kim gets pregnant again." 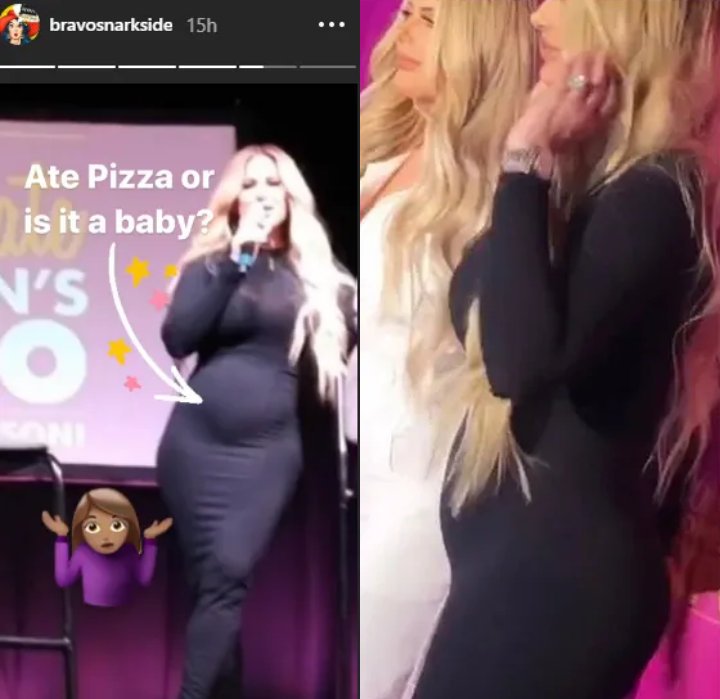 Kim's daughters Brielle Biermann and Ariana Biermann leaked the supposed pregnancy news earlier this month in an Instagram video. In the clip, the girls gave a tour of what seemed like a hotel room before the camera captured their mother Kim, who was donning pajamas. "She's pregnant 3 months," Ariana said of her mother. Kim appeared to nod in agreement, while Brielle was laughing.

It's unclear if the girls were joking with the pregnancy announcement. Kim's eldest daughter Brielle previously trolled her mother when she joked she was pregnant with baby No. 7 back in 2017. "OMG!!! i'm so excited my mom is PREGNANT with baby number 7!!!! OMG!!!! i can't wait to meet the little nugget inside. it's been so hard keeping this a secret!!! wooo!! #lucky7," Brielle wrote on Twitter, before Kim clarified it on Snapchat, "Brielle's lying! She's lying."

Brielle and Ariana are Kim's daughters from her previous relationships. Her husband Kroy adopted the two girls in 2013 after the couple got married in 2011. The former "Dancing with the Stars" contestant and her current husband welcomed their son Kroy Jagger in May 2011, Kash Kade in August 2012 and twins Kaia Rose and Kane Ren in November 2013.