The 'Hot Girl Summer' femcee replies to one of her Twitter followers who asked if hooking up with Trigga was worth it after the two stars' cozy night out went viral.

AceShowbiz - Megan Thee Stallion broke her silence on the online chatters suggesting that she was dating Trey Songz. Their romance rumors intensified after they were caught on camera getting flirty at his recent birthday celebration.

Despite getting cozy with the R&B singer, Megan insisted she didn't hook up with him. "@theestallion so was It worth It? What Trigga hitting for sis? [laugh]," one of her Twitter followers asked following their night out. "I ain't hit so idk lol," the star responded.

"Why y’all want me to be a 'h**' so bad ? Lol I've only dated ONE person y'all know about," she added in a follow-up tweet, referring to rapper MoneyBagg Yo. She continued, "All that other s**t is RUMORS/LIES ... I ain't addressing s**t else bye."

Besides sparking romance rumors between Megan and Trey Songz, the night out led to speculations that the "Hot Girl Summer" star had feud with fellow rapper Saweetie after she was seen asking the DJ to turn off Saweetie's song.

Megan wanted no drama, however. She quickly shut down the rumors, "Before this gets out of control lol what was happening is I kept asking them to play Trey’s songs for his birthday... stop trying to make me beef with people." 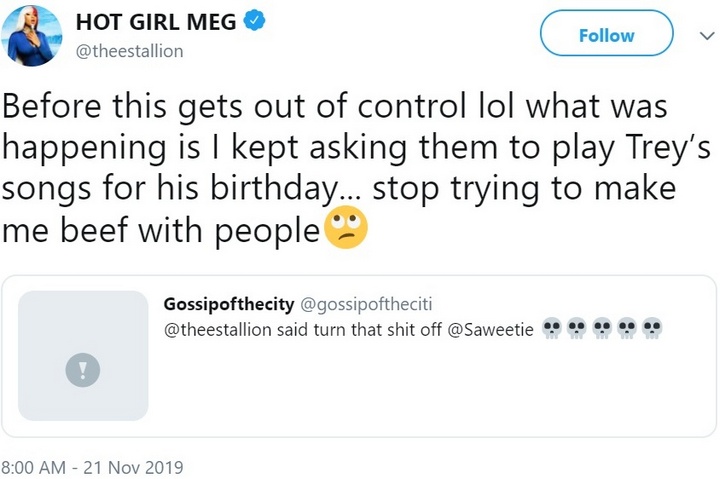 Megan Thee Stallion has no beef with Saweetie

She then suggested people needed to calm down as she re-tweeted this message, "Let's play the stop trying to add men to @theestallion body count challenge. PS: If you pre-order the shes not beefing with anybody edition itll come with free happiness and a jealous free social life."

Hot Girl Meg additionally used her social media to clap back at her haters. A male individual by Twitter name @KyleGoPlay recently dissed her, "U looked at as a h** now. Stop twerking in every video and feed these young women something for their brain. Bring substance back!" She reacted, "And You're looked at as an insecure man now I'm a senior in college and an artist I can twerk if I want to." She also mocked him back, "Now go play Kyle."

Megan Thee Stallion Rings In 2020 With Beyonce and Blue Ivy

Megan Thee Stallion Watches Beyonce's Interview to Get Through Her Struggles

CEO of Megan Thee Stallion's Label Says She Doesn't Bring Him Any Money, She Responds