The 'Thor: Love and Thunder' director tells fans of the superhero movies to be careful of what they wish for because the studio tends 'to go the other way.'

AceShowbiz - Taika Waititi tells Marvel fans to speak less of what they expect to see in a future movie, or there won't be even a chance for the idea to turn into reality. The "Thor: Ragnarok" director is particularly talking about fans who have been shipping Tessa Thompson's Valkyrie and Brie Larson's Captain Marvel.

While he doesn't say he is against the idea, the filmmaker hints that it may not happen because the studio isn't always listening to fans' wish. "The thing is, I think it's dangerous for people to say too much about what they want with Marvel, because then they will tend to go the other way," Waititi warns fans in an interview with Wired.

He goes on explaining why Marvel won't fulfill fans' wish, "You want to listen to the fans to a point. But also you don't want to have a completely fan-made film because then it doesn't feel like there's any point. You want to have people surprised."

Valkyrie and Captain Marvel's possible romance aside, Waititi promises the next Thor movie won't be less interesting. "It's going to be bigger and louder and more bombastic," the "Jojo Rabbit" helmer teases about "Thor: Love and Thunder". "It's only interesting to me if we're doubling down on how nuts Ragnarok was."

Thompson, who will reprise her role as the former warrior of the Valkyrior, previously confirmed her character's sexuality at San Diego Comic-Con back in July 2019. "I think first of all...she needs to find her queen. That'll be her first order of business," she said about what to expect in "Love and Thunder". 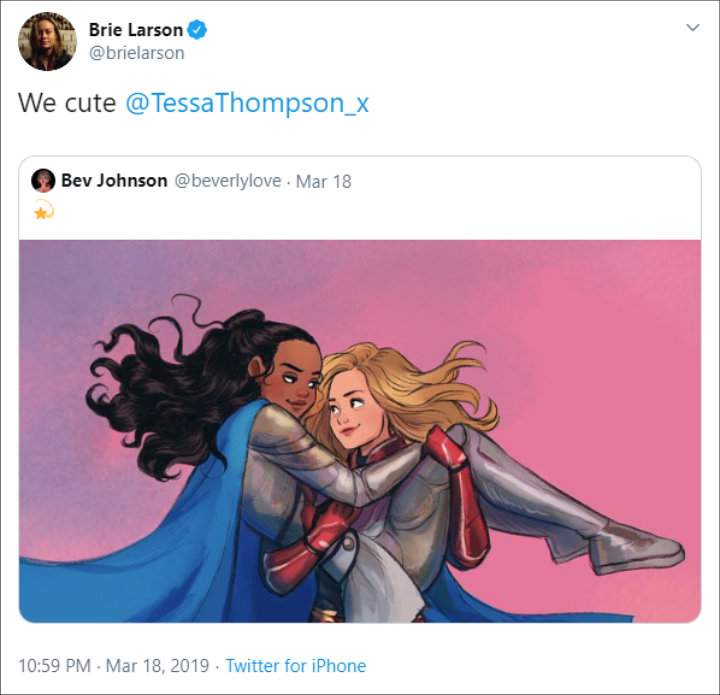 Fans then began shipping Valkyrie and Larson's Carol Danver a.k.a. Captain Marvel, with a fan drawing an artwork of the two female superheroes sharing a loving embrace. Responding to fans' idea positively, Larson commented on the artwork, "We cute @TessaThompson_x."

Chris Hemsworth Denies Rumors About His Retirement After 'Thor: Love and Thunder'

'Thor: Love and Thunder' Will Have Space Sharks

Christian Bale Unveiled to Have Joined 'Thor: Love and Thunder' as Villain