JWoww scoffed at her reasoning. "Oh ok that makes sense," she mocked. "Glad what you did was a joke, and u grinding on him was a joke... and u kissing him was a joke.. BUT when he joked back, you made it seem like he was a creep and destroyed him in interview. Got it. Makes total sense now." 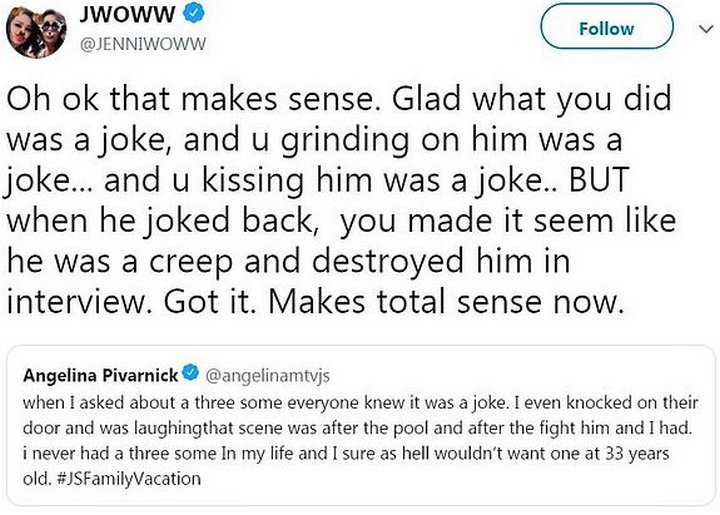 She later added that she "found the whole night funny and no big deal." However, she had issues with Angelina's hypocrisy as she explained, "What I don't like is when someone says how fun the night was (in text) and then goes in front of a camera and says the opposite."

When a fan called her out for getting mad at Angelina but not at Zack, JWoww replied, "Who said I'm not mad at both? Both are idiots but they instigated each other... only difference is Angelina gets to talk about it on the show... like if you were that uncomfortable tell me.. don't tell others and text me how much fun it was."

JWoww announced last week that she broke up with Zack after she saw on television how he flirted with Angelina in Las Vegas while she drunkenly passed out. She put her boyfriend and castmate on blast, saying that she felt betrayed and disrespected by both of them.

While Angelina insisted that Zack's attention was unwanted, JWoww claimed otherwise. Zack later apologized to the two girls, saying he loved JWoww and promised no repeat of his inappropriate behavior.