The 'I Like It' rapper insists she's black despite her mixed race of Dominican, Trinidadian and Spanish after people question whether she should be allowed to use the 'N word.'

AceShowbiz - Cardi B has sparked an online debate about her race after she doubled down on her claim that she's black. The Bronx femcee clapped back at haters after they questioned if the "Bodak Yellow" hitmaker should be able to use the "N word" or not.

Taking to her Twitter page on Tuesday, October 15, the mother of one wrote in a now-deleted tweet, "My nose, my lips, my hair , my color my features don't come from two white people f**king," She went on telling the haters to do some research first, "Ya fake woke motherf**kers always trying to strip people ROOTS do to their NATIONALITIES.Read a book first !" 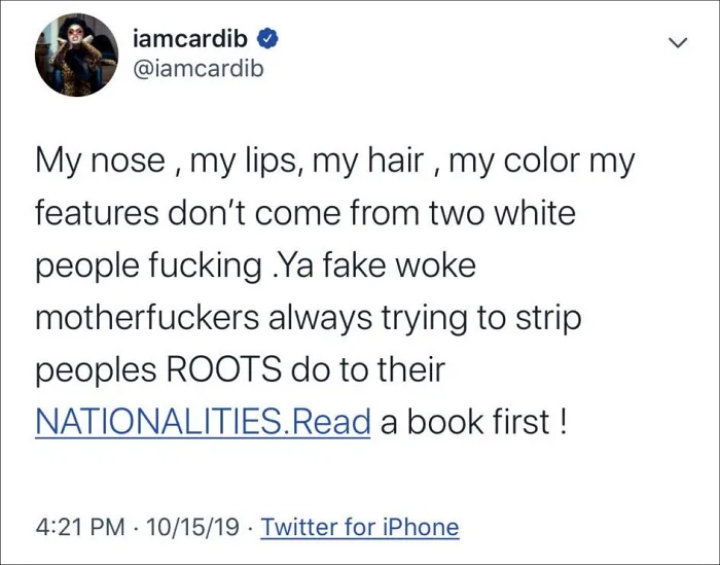 Cardi B lashes out at people calling her 'not black.'

She also uploaded an old video in which she talked about following "pro-Black pages" that taught her how to style her hair and embrace self-love. She captioned it, "But the crazy s**t is when I did videos like this people used to say are you black 'but you speak Spanish so I just started saying I'm carribean cause had to always argue and then people started claiming that I don't claim my blackness.Its like it's always a L."

People then started weighing on whether Cardi is considered black or not. The hip-hop star is of mixed race, being born from a Dominican father and Trinidadian and Spanish mother.

"This issue of black and white am tried we should all be one, cardi is a light skin black woman she has my sister color, but me am RED s**ttt," one agreed with Cardi. Another slammed the Internet trolls, "She actually is BLACK all latinas / latinos are Black & the miseducation of this world & the word Afro-Latina will be fixed very soon."

"Your moms from Trinidad, Trinidadians are of African and native descent. What is someone who has African descent Labeled as in America? Black! Don't let them tell you who you are you know who you are," someone else argued, while another simply said, "Cardi B is definitely of black heritage wtf."

Defending Cardi, one said, "Cardi B has always accepted being black. So u telling me mixed people have to choose one culture and dump the other one She has express Dominican and trini sides on how she talks. Don't ever trash @iamcardib name🤣 Trippin trippin."

Another user shared the same issue with Cardi and shared some advice, "I am Puerto Rican and I am asked if I am black or not, I just tell them I am what you think I am. I am part of the human race. It is not worth explaining that we are a beautiful mix of beautiful raices."

Those who don't think that Cardi is black wrote things like, "Still don't see how you can be black without having a black parent. Make it make sense," and, "Cardi B ain't f**king black bro."

Another gave a fiery response, "If you had 3% black in you girl you still ain't black!. So stop claiming and lying. Just bc you've had black in you, doesn't mean you black, and if you have a black aunt Or uncle , it still doesn't give you the right to say the N word!. You're Latina girl!!!"