The Peter Parker depicter reveals on a panel at ACE Comic Con Midwest that Spidey's temporary split from Marvel Cinematic Universe gave him the most 'stressful week' of his life.

AceShowbiz - Tom Holland has described Spider-Man's temporary departure from the Marvel Cinematic Universe (MCU) as the most "stressful week" of his life.

In August, it was revealed both companies couldn't agree on new co-financing and profit-sharing terms. Therefore, the deal they made in 2015 to share the film rights to Spider-Man was off - meaning the web-slinging superhero, played by Holland, would no longer be a part of the MCU.

However, the following month both companies announced Marvel Studios president Kevin Feige will produce a third MCU Spider-Man film starring Holland - which came as a huge relief to Tom.

Speaking on a panel alongside "Spider-Man: Far From Home" co-star Jake Gyllenhaal at ACE Comic Con Midwest over the weekend, the actor initially described rehearsals for his performance of Rihanna's "Umbrella" on U.S. TV show "Lip Sync Battle" in 2017 as his "most stressful week" - before reflecting on more recent events.

"Well...maybe the whole Disney/Sony thing when that happened," he mused. "That was a bit of a stressful week. I'm sure there's some contractual obliged thing where I can't say anything about anything, so I'm just going to keep my mouth shut."

After a new deal between Disney and Sony was announced, The Hollywood Reporter claimed the star played a key role in negotiations, reporting that Tom made "multiple appeals to Disney chairman and CEO Bob Iger and Sony film chairman Tom Rothman to reach a resolution."

Tom Holland on Unexpected Online Interaction with Justin Bieber: 'This Is Wild' 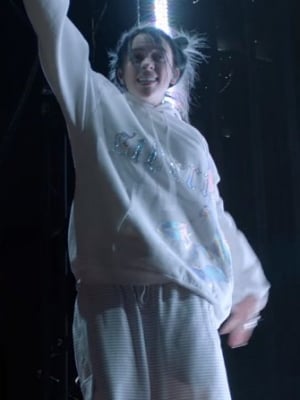